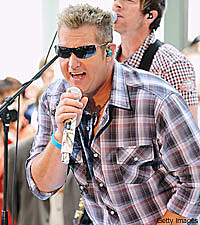 Rascal Flatts -- Gary LeVox, Jay Demarcus and Joe Don Rooney -- are getting ready to hit the road later this month for their Nothing Like This tour. And, according to Jay, the name of the tour fits their show perfectly.

"We always try to outdo what we've done before and it gets harder every year," the Flatts bassist/piano player tells Nashville's Tennessean newspaper. "It's very difficult to figure out how to take it to the next level. This year we tried to make it really simple and just do as much music as we can."

Hoping to cram ten years worth of hits into one big show, the guys will begin with their very first single, 'Prayin' for Daylight,' and take their fans on a musical journey all the way through to their more recent hits, including the current Top 10 single, 'Unstoppable.'

"It's going to be four hours and 40 minutes when we're done, and Gary's not going to be able to breathe by the time we get to the last song," Jay jokes. "But we're really looking forward to it because it's going to be a lot of music and very little talking, and we're going to try and get to as many of their favorites as we can."

Kellie Pickler and Chris Young will join the Flatts as opening acts on the tour, which runs from June 25 to Sept 19. In addition, the guys will shoot a miniseries for HBO this fall, called 'To Appomatox.'