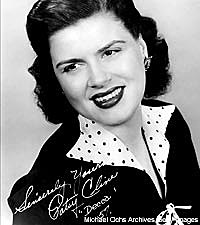 Only two weeks after Nashville's city planning commission approved a proposal to rename part of Music Row's famous Music Square East to Patsy Cline Boulevard, the legislation was withdrawn after complaints were made from a local resident.

"No offense to Patsy Cline," Music Square East resident Christina Lapoutre told Nashville's WSMV-TV. "I think she was an amazing, legendary musician, but part of the reason I live here is because it's Music Square East. It's a great landmark for Nashville, and internationally, it's very well-known."

Patsy Cline Boulevard was to join streets already named after famous icons, including Roy Acuff Place and Chet Atkins Place. Patsy's former producer, Owen Bradley, also has a nearby park named after him. Council members will now look for other ways of honoring Patsy, who's life was cut short at the young age of 30 in a 1963 plane crash.

Other Music Row East landmarks include performing rights organization BMI -- which represents such Patsy-associated titles as 'Crazy' and 'I Fall To Pieces,' Warner Bros. Records -- the recording home for Faith Hill and Blake Shelton, Curb Records -- home to Tim McGraw and LeAnn Rimes, and an office built on the grounds at the very corner where Patsy recorded all her hits.