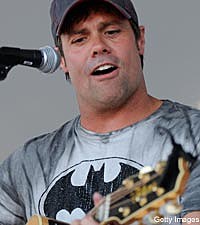 Troy Gentry of Montgomery Gentry spends most of his downtime on the Country Throwdown tour visiting with other musicians, checking out other artists' performances and enjoying the nightly cookouts the BBQ Band hosts for performers and crew.

But when he's out watching other musicians play during the tour, Troy has found -- much to his pleasant surprise -- that the mix of musicians has not only been a treat for the performers, but also for the fans.

The tour has also given the musicians and their crews a chance to get to know each other casually through late night guitar pools that generally start after the BBQ has ended. Adding to the camaraderie are the songwriters that joined in the tour's caravan to work with performers before the performances begin. The creativity from working with those writers helps the performers -- whose shows are tightly scheduled due to festival time constraints -- keep their imaginations sharp for the tour and beyond.

"That's what keeps artists' fresh," says Troy of the collaborations. "You can't stay tunnel visioned or in one groove. [Collaboration] keeps your mind fresh and helps you develop new ideas."

The Country Throwdown Tour will stop in Raleigh, N.C. on May 29 and is scheduled to end on June 20 in Mountain View, Calif. For more dates and details, check the tour website.