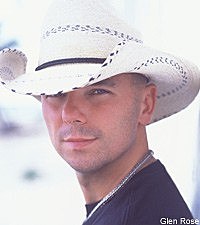 Think you have what it takes to open for Kenny Chesney? Country's biggest touring star has launched a 'Big Star Contest,' offering unsigned singers a chance to perform onstage during his tour stops in their hometowns. Thirty-four of Chesney's stadium shows will feature a battle of the bands on the night before the actual concert, and he himself will handpick his opening act.

"People told me I was crazy, and logistically, it's taken a whole lot of people to sort out just how to do it . . . to be fair and to find local bands all over America who deserve the shot," Chesney explains.

Out of the 34 winners, one will score the grand prize of touring with Chesney on his last three shows in the Fall, plus $25,000 and an audition with Sony BMG Records. The country star says his goal is to get the next generation of George Straits, Reba McEntires and Alabamas "closer to the dream."

Chesney's 'Poets and Pirates' Tour' kicks off April 18 in Connecticut.