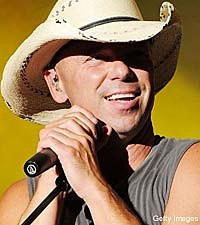 Kenny Chesney's long awaited new single, 'Boys of Fall,' hits radio airwaves this week. The song tackles one of Kenny's favorite subjects: football. When the tune made its way to the country superstar, he was blown away by the way songwriters Dave Turnbull and Casey Beathard captured the essence of something he loves so much. Kenny immediately knew it was a shoo-in for his new album.

"I just stopped right there, and played it over and over again," Kenny says of 'Boys.' "I knew -- as maybe only someone who has felt that thrill of rushing out onto the field on a cold Friday night can -- that was exactly how it is. It also gives you a sense of why playing football in high school is such a powerful thing for anyone who does it. It's life changing. For anyone who's never experienced that, this song helps them understand why."

Listen to 'Boys of Fall'

The song's video features New Orleans Saints' coach Sean Payton delivering a heartfelt speech to the team, as he reminisces about his own high-school football career.

"The song and the video [are] not just about people who play football and go onto be Joe Namath or Kirk Herbstreit," Kenny explains. "It's about the moms driving their kids to practice, and the way this will shape the men their sons will become [or] the girls who come to the games and cheer, and are part of why the boys want to achieve. It's about the towns who identify with the fate of their team so heavily. It's a topic of conversation at the diner or the barber shop ... the players who won't play past high school, but use the lessons they learn to become successful as their lives evolve.

"Anyone who thinks high school football is just a game hasn't really experienced the best part of high school football," Kenny continues. "For the coaches, it's the chance to shape lives; for the kids, it's the rush and the glory; for the people watching, it's the thrill of seeing their young men achieve. It brings all kinds of communities together in ways people don't often think about, but anyone who's heard this song, they nod their head and smile because they know."