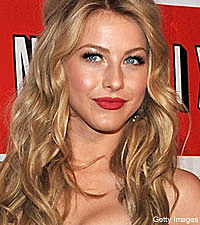 Julianne Hough has scored a role in an upcoming movie that boasts a roster of multi-talented entertainers. The 'Dancing With the Stars' champ-turned country singer-turned actress will star as a dancer in 'Burlesque,' a musical about a small town girl, played by Christina Aguilera, who becomes a star at a Hollywood Burlesque club. Grammy-winning singer and Oscar-winning actress Cher will play the owner of the club. Kristen Bell, of 'Veronica Mars' and 'Forgetting Sarah Marshall' fame, has signed on for the role of Christina's dancing rival.

'Burlesque' is set to begin filming next month and will likely hit theaters in late 2010. Julianne will be seen in at least one other movie next year, as she also has a part in the remake of the iconic 1984 flick, 'Footloose,' starring opposite 'Gossip Girl' actor Chace Crawford. That movie will begin production in March, with a reported release date of June 18, 2010.