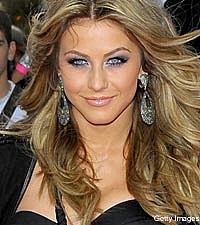 Julianne Hough first gracefully and effortlessly glided her way straight into the hearts of America on 'Dancing With the Stars,' but it quickly became clear that this fresh-faced, all-American beauty was more than just a great pair of legs.

Her self-titled debut firmly launched her as one of country music's up-and-comers, landing her coveted opening stints on tours with George Strait and Brad Paisley. A triple-threat talent who can act, sing and dance, Julianne is currently filming 'Burlesque' for the big screen, and settling in for the next few months to lay down tracks with producer Dann Huff for her second country album, which is due out next summer.

The Boot caught up with Julianne during a breathless week of appearances at awards shows, movie premieres and other celebrity happenings to chat about ballroom dancing, the challenges of being a "girly girl," and life since her much-publicized break-up with boyfriend Chuck Wicks.

What was it like running into your ex, Chuck Wicks, at the CMAs, so soon after the breakup?

We didn't run into each other – we actually went together. We're great friends, and everything we do, we're still in contact with each other. We really are best friends, and so we had a great time at the CMAs.

You're filming a remake of 'Footloose' this spring. What was it about the original that you think everybody latched onto and loved, and what do you think will be different about this version of the film?

We start shooting 'Footloose' in March. The first film was so great, I think it was at a time where the economy was down then, and the troops were out, and I feel like we're in a very similar situation now. I feel like everybody wants that back, that fun energy that musical movies have. Everybody loves the movie, and I'm really excited about it. It's gonna be fun to do.

And you're shooting another film with one of your musical idols ...

Yes, I'm filming 'Burlesque' right now, and it's fabulous. It has a huge, amazing cast. Christina Aguilera, Cher, Stanley Tucci, Eric Dane and Kristen Bell all star in it, and it's just a great film. The storyline is great, and the dancing is phenomenal. And of course Christina sings her butt off in it!

Has Christina given you any tips about the music business?

Absolutely! She knows what she wants, and she's phenomenal at everything she does. I was in the studio with her the other day and I was flipping out because she's been my idol since she first came out, so it was just a really cool experience for me just being there and watching how she works. I was blown away! Her voice is so phenomenal, and hearing her sing these new songs is just amazing. 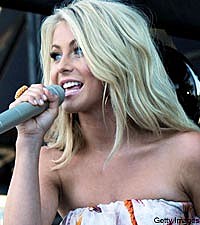 Acting or singing ... do you prefer one over the other?

I love everything. I love to dance, and sing and act. I think the music will always be my base, my foundation. I'll always have that as my number one. I'm excited, I'm working on my new record right now, and I'm home for the next couple of months just singing non-stop for the album. So hopefully I'll have a new single out by the end of January or early February, and have the album out by early summer.

What can we expect from this new album? Are you worried about the sophomore jinx at all?

Oh yeah, this is my most important record. My first record was great for what it was, and it was very positive and lighthearted and everything, but it was very quick. I did it in three weeks. It was kind of just, 'Alright, go sing these songs,' and so you go do it. You put your trust in everybody and kind of doubt yourself. But this time around I know exactly what I want and I'm not doubting myself. And I've got a little more confidence. It's more mature and a little more edgy -- not necessarily rock 'n' roll edgy, but maturity-wise. Being a dancer, there's a lot more grooves in my songs but very real, sincere lyrics. On my last record I tried to just sing, but this time I want to do everything. I want to give my fans that know me as a dancer and like me from the show something, too. I still want to make them happy and pleased. Plus, it's inside of me and I want to be able to dance in some music videos and have some fun at that, too.

Did you change anything around production-wise for this new record?

I'm working with Dann Huff for the first time on this album. He's phenomenal ... he really gets the direction I want to go in and we're very collaborative. I put everything in his hands and we're very much a team. I've been writing a lot for this new record. I didn't write for my first one. I've been writing a lot with Chuck, too, so we're having a blast! It was definitely a confidence booster writing with him.

Do you find yourself missing 'Dancing With the Stars' sometimes?

A little bit. I've been in L.A. for the last couple of weeks and I've seen my brother [dancer-musician Derek Hough] five or six times. I definitely love what I'm doing now, and I don't regret it not being on the show. But I watch the show, and it's fun to watch, but it's weird not being there now.

As a dancer, do you have to work out every day?

I try to. I have a new dance-fitness DVD that comes out Dec. 15 called 'Cardio Ballroom,' and certain things on it I do while on tour. That's the only way I stay in shape. I hate to run, I hate to lift weights, I hate all that stuff. It's boring to me, so that's why I wanted to do the DVD. It's fun and easy and anybody can do it, even if you've never danced in your life. It makes you really lean, too. So I'm excited about that. And that's what I do to keep in shape when I'm not on the show. I've also included some good fitness and style tips in my Venus Embrace Goddess Guide that I co-authored with Venus. It's a great thing for girls for their self-confidence, to help them feel great about themselves. I had fun writing it and being part of that, as well.

You always look flawless! What's the hardest thing for you about being a girl?

Oh my gosh, probably just being a girl! It takes a lot longer to get ready than a dude, you know! We shave our legs, we tweeze our eyebrows, we get out hair done -- it takes forever to put extensions in, we have to put eyelashes on, we put fake tan on ... it's like bam, bam, bam, we have to do all these different things.