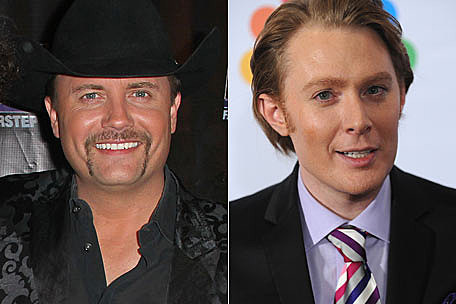 "Playing drinking game with my brother now. We drink every time we see a black person on screen at the RNC convention. #soberasamormon," Clay tweeted.

That tweet angered a few fans online, who accused Clay of making racist claims, but it was the comments from the Big & Rich singer-songwriter that stung the most.

"You should be ashamed for racist comments like THAT! WOW," John tweeted, adding, "And to finish it off, @clayaiken hashtags soberasamormon? I thought your charity was for inclusion, not EXCLUSION. What happened?"

Clay was quick to respond, tweeting back at John, who has historically supported the Republican party, "My charity is. Why isn't your party? ;-)."

The politically-motivated debate ended there, but it hasn't stopped from continuing to anger some of the 'Idol' singer's more conservative fan base.

Do you think Clay Aiken's comments were racist, or was he making a commentary on the Republican party? Tell us on Twitter @TheBootDotCom.

Watch a Video on the Clay Aiken Twitter Controversy