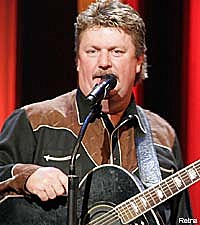 Thousands of young hopefuls have descended upon Nashville in the hopes that they will be the next Carrie Underwood, Kellie Pickler, Danny Gokey or Bucky Covington -- stars who got their start on 'American Idol.' On Thursday, July 15, more than 10,000 people stood in line in the scorching downtown Music City heat to receive a wristband, which will allow them into the Saturday auditions for Season 10 of the show.

As was the case with just about every previous season, there always seems to be a country connection, whether it is a country star who emerges during the finals, or a country artist who mentors or performs on the show, or as is the case this year, someone who is related to a country star. That's the case with two of the possible Season 10 contestants.

Joe Diffie's children, 28-year-old Parker and 25-year-old Kara, are just two of those aspiring stars hoping to catch the judges' attention this weekend. Their father is certainly proud of both of them and thinks they have what it takes to make it. "They both are really good singers and good people," Joe tells The Boot. "It's pretty gratifying to see their interest in music. I've recorded both of them here at the house, and people rave about how good they sound."

However, the 'Pickup Man' and 'Prop Me Up Beside the Jukebox' singer is a bit apprehensive about the whole 'American Idol' procedure. "The A.I. process seems pretty daunting, and I would have to think that it isn't purely music-based," Joe says. "I don't know much about it really, [but] I just don't know how in the world you can glean talent from the thousands of folks who try out, not to mention the one's who are just there to get their mugs on TV."

'American Idol' supervising producer Patrick Lynn agrees that it takes more than talent. "Pick a good song and have personality," he tells Nashville's Tennessean newspaper. "I cannot stress that enough. Personality plays a huge role in it."

Unfortunately, Joe will not be in Nashville to see his children audition. He is booked to perform a show in Jackson, Miss., on Saturday. But if Parker and Kara make it to the next round, Dad will certainly be there to cheer them on.