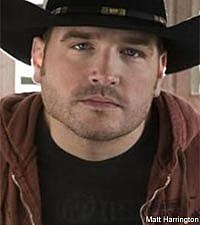 The country singer is the first artist signed to Brad Paisley's record label, Sea Gayle. And while the label, started by Brad along with songwriter Chris DuBois and producer Frank Rogers, may be a new venture for both of them, they have actually spent several years getting to know each other.

"I'll tell you what's really cool about the situation is I've been writing for a publishing company that Brad's owned," Jerrod tells Michigan-based radio station B93. "This is my fifth year there."

Jerrod, who lists Jamey Johnson, Garth Brooks and Neal McCoy among the many artists who have cut his songs, has been concentrating on songwriting since his former label, Category 5, shut its doors. And while he's happy to now be working with one of country's most powerful artists, he says Brad is giving him freedom to make the music he wants.

"Brad, although he's definitely gonna put his expertise in, everybody's been cool enough to let us do our thing. And then if something comes up where we could use their help on, then obviously we'll go to those guys, whether it be to write or to have their opinion on a song. But for the most part, I did that whole project on my own and gave it to them. I just did it for fun and they ran with it."

Even though his album has yet to be released, his first single, 'One More Drinking Song,' is already generating a lot of buzz. And while the song is funny and light-hearted, he admits he was also trying to get a point across.

"Everybody in Nashville sits around and tries to figure out what all the people you play music for would like or dislike and really none of us know," he says. "If anybody has any ideas, it's the people who are going out at night or playing honky tonks. I had already been given a lot of flack for having so many drinking songs, that I went back and wrote a song called 'One More Drinking Song.' The reason everybody tries to avoid them in Nashville is because they think that anybody besides guys will like it and I just thought that was ridiculous. I was just mocking our system in town of how everybody thinks they know everything about everybody's brain ... and they don't."

Jerrod's album will be released later this year.