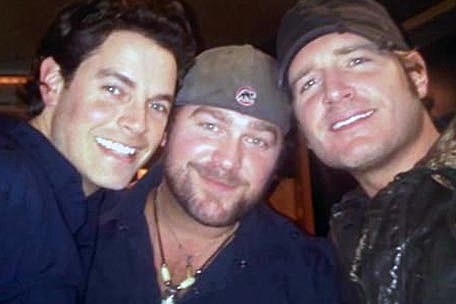 What happens when you gather a handful of country music's brightest new stars and put them in the back of a tour bus together? This past Sunday evening (November 28), fans got to find out as Jerrod Neimann (pictured above, right), played a donation-only benefit at Legends Corner in downtown Nashville, as a completely different kind of show took place in the back lounge of Jerrod's bus.

Held in four separate segments throughout the evening, Jerrod, along with Lee Brice (middle), Jaron and the Long Road to Love (left) and Chris Young (not pictured) hung out with fans who tuned in to StageIt.com, a newly-created online platform delivering interactive live performances.

StageIt's interactive chat feature allowed each artist to ask for (and then honor) fans' song requests in real time. In addition, a virtual "tip jar" is also featured, and in the case of this particular concert event, which was organized by Jerrod, all donations from fans were made on behalf of the singer-songwriter's drummer, whose father recently passed away. Proceeds raised will help the family with bills.

"StageIt allowed us to include everyone across the country who wished to participate and contribute and still feel part of the event even though they were unable to attend the concert in person," said Jerrod.

In addition to giving away autographed CDs during the online event, phone calls from the artists were made throughout the evening -- all in real time -- from the comfort of the lounge in the back of the bus. More than 200 fans attended the impromptu shows, which were announced just minutes before each took take place, using only the artists' Facebook and Twitter pages. A total of $2,007.20 was raised throughout the evening.

Evan Lowenstein, the founder and CEO of StageIt (and Jaron's twin brother), reflected on the success of the event, saying, "Artists, by their very nature, are incredibly generous, so it's no surprise that artists like Jerrod, Lee, Jaron and Chris would think to use StageIt as a vehicle to raise money for a cause that's important to them. With StageIt's 'social tip jar,' performers and fans can see donations made in real time, which helps to drive overall revenue by creating a stronger sense of purpose and community."

StageIt, launched in the fall of 2010, gives artists the ability to choose when they want to perform, for how long and how much they want to charge for their performance. Other artists who have performed on the site include Debbie Gibson and Chicago lead singer Jason Scheff. For information about upcoming StageIt events, click here.