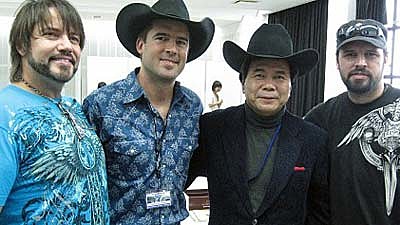 Last month, Mark Wills, Trent Willmon and Jeff Bates - took their 2009 Honky Tonk Tailgate Party to the world-renowned Country Gold Festival in Kumamoto, Japan. Thanks to online networks such as Twitter and Facebook, fans were able to keep up with the guys on their trip. They even documented their first meal in Japan with a comical video. But they had to settle for Big Macs from McDonalds, since all the restaurants were closed by the time they arrived after the 26-hour journey overseas!

During their week-long stay, the guys also visited a "fresh" sushi bar where they were able to pick out their live fish for dinner, and exchanged gifts with Ikuo Kabashima, governor of Kumamoto prefecture. "The Japanese people are the hardest working, most gracious, friendly, and sincere people I've ever been around," Trent tells The Boot. "They treated us with the highest respect everywhere we went. I can't wait to go back."

"From the moment we landed in Tokyo, everyone was genuinely nice and humble and very helpful, not just to us but to each other as well," adds Jeff. "The country is kept immaculately clean as well as the city. They are light years ahead of us on energy conservation, and they use every inch of their limited space wisely. I had a blast at the Country Gold concert, but I have to admit, the most fun was at [the country bar] Good Time Charlie's where every night we had a huge jam session with Charlie Nagatani and his extremely talented band."

One of the major highlights for Mark, Trent and Jeff was closing out last night at Good Time Charlie's with the gospel tune, 'The Old Rugged Cross.' receiving a standing ovation.

"I would've cried if Mark hadn't beat me to it," Jeff says.

"It's pretty amazing," Mark notes. "I'm still pretty emotional about it. There's not really a lot of ways to put it into words, what we've experienced. It's been a life-changing trip, coming over here and getting to meet all these great people and getting to experience this great culture."