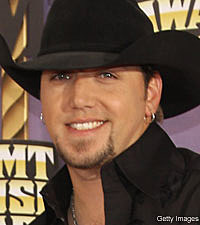 More than 4,500 concertgoers at the Knoxville Coliseum will become a part of history this weekend as Jason Aldean includes them on a live concert DVD he's taping Friday, March 6. The DVD, which is being shot in high-definition, will be released later this year.

"Making a live DVD has been a dream of mine for years," says Aldean. "Now feels like the perfect time to do it because we've just added several new songs from the new album to the set list. Plus, I'm excited to shoot it in Knoxville because you can't find a more fun crowd ... they are young and always come ready to party."

Aldean is in Nashville this week during Country Radio Seminar, giving radio and media folks a preview of songs from his third album, 'Wide Open,' which is set for release on April 7. His latest hit, 'She's Country' is MySpace's most streamed country song that's currently on the Top 40 chart. It's also one of the most downloaded country songs on iTunes.