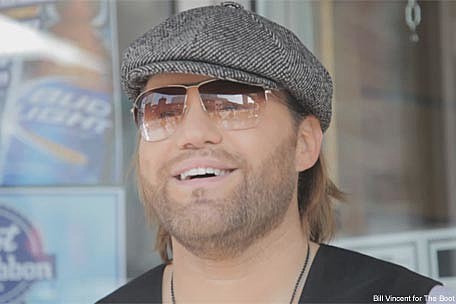 "They travel from around the country -- it's like [the movie] 'Planes, Trains and Automobiles' trying to get here," James Otto says of the thousands of country music enthusiasts who visited Nashville last month for CMA Music Fest. "Every fan here has got their own interesting story and every artist has their own story, too, like signing a baby. Lots of interesting requests!"

The Boot's 'Day in the Life' video shoot took place right in the middle of Music Fest during a jam-packed day (that unfortunately did not include the signing of any skin!). We started at the Music Row Live! radio remote at a Nashville recording studio, where radio deejays from across the country were stationed to broadcast live from the annual country music extravaganza. In the course of just about two hours, James made the airwaves on country stations in more than a dozen cities, stretching from Rochester, N.Y. to Jacksonville, Fla.

'Groovy Little Summer Song,' James' feel-good new single, started the conversation at most stations, as deejays praised the singer for his latest hit.

"It celebrates all the things you love about summer," James told his hometown station, Nashville's WSM-FM. "It's got that groovy, country-soul sound that really sets the tone for the whole record."

The tone of James' interviews sometimes got a little more playful, as he joked with one station that he thought about changing the title to 'Groovy Little Summer Thong' and told another it was just part of his "baby making music" repertoire. And when he was done with his own interviews, the country-soul crooner decided to invade someone else's!

"I haven't seen Gretchen Wilson in a while," James said, looking into our camera with a sly grin. "We're gonna go crash her interview."

James then walked into the room where Whitney Allen was interviewing Gretchen for the syndicated radio show, 'The Big Time With Whitney Allen.' Visibly stunned, Gretchen stopped mid-sentence to give James a big bear hug, and the interview then proceeded with both of them talking to Whitney about everything from music to the craziest video they've seen on YouTube lately.

http://xml.channel.aol.com/xmlpublisher/fetch.v2.xml?option=expand_relative_urls&dataUrlNodes=uiConfig,feedConfig,localizationConfig,entry&id=909326&pid=909325&uts=1285096279
http://www.aolcdn.com/ke/media_gallery/v1/ke_media_gallery_wrapper.swf
A Day in the Life: James Otto
The Boot followed James Otto around for a day!

Babies were on the brain during James' interview with Dial-Global's Kelly Ann Monahan, as he talked about his baby daughter, Ava Katherine, due in August. "It's like a pink explosion!" he said of the nursery that his wife, Amy, has decorated in preparation for their first child.

After a quick stop at James' record label, Warner Music Nashville, for two more interviews, we headed to downtown Nashville's famed lower Broadway for a CMA Music Fest treat. James held a private show at Paradise Park Trailer Resort, a bar and restaurant that celebrates all things hillbilly, from the tater tots on the menu to the photos of people with mullets scattered all over the bar.

Arriving a little bit early to his gig, sponsored by CMT as part of their Summer of Music concert series, James went straight to the bar to mingle with fans. A line quickly formed, stretching from the pool tables to the beer kegs, with CMA Music fest-goers anxiously awaiting an autograph or a photo with their favorite singer.

The show was an intimate one, with the audience consisting of only James Otto Fan Club members, CMT contest winners and a few industry folk. So there wasn't a bad seat in the house, though very few took their seats, as most were up dancing and singing along at the top of their lungs as James and his two guitar players, Tyler Cain and Kyle Whalum, played a hit-laden set that included 'Groovy Little Summer Song,' 'Just Got Started Lovin' You,' and 'In Color' -- the 2009 CMA Song of the Year that James co-wrote with buddy Jamey Johnson. He also gave fans a sneak preview of his new album, due in September, playing one of its tracks, 'Soldiers and Jesus.'

"This is a really powerful song, something that only comes along once in a while and really moves people," said James of the track that he hopes will be the next radio single. "It's about the only two people who ever died for me, soldiers and Jesus."

If the crowd reaction was any indication, it's sure to be a hit. James received a standing ovation after the performance, with deafening cheers ringing through Paradise Park.

At the end of his set, the charismatic singer stepped right off the stage and started shaking hands, signing autographs and taking pictures ... making sure each and every person there had their own James Otto CMA Music Fest story to take home.

Filed Under: James Otto, JamesOtto
Categories: A Day in the Life, Exclusives, Interviews
Comments
Leave A Comment
Country Stars Who Have Served in the Military
Country Music’s Top 10 Unforgettable One-Hit Wonders
LOOK: Country Stars and Their Famous Relatives
‘The Voice’ Contestants Ethan Lively and Avery Roberson Face Off in Battle Round With James Otto’s ‘Just Got Started Lovin’ You’ [WATCH]
Top 10 War Songs in Country Music
Top 5 Country Songs About Football
Story Behind the Song: James Otto, ‘Where Angels Hang Around’
James Otto’s First Song on the Radio Wasn’t a Big Hit, But He Still Loved It
James Otto’s Grandfather Passes Away