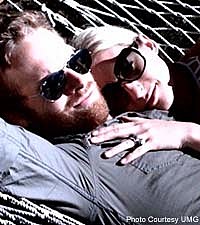 Holly Williams' designer wedding gown was "covered with mud and ripped to shreds" after her nuptials on Sunday -- but that only made the singer laugh at the fun she had on her "magical" day.

Holly, granddaughter of Hank Williams and daughter of Hank Jr., married her drummer, Chris Coleman, outdoors at an historic farm estate in Nashville. The bride was escorted down the aisle by her dad, whom she tells PEOPLE "was wildly nervous but he did great with it. He kept himself together."

Her groom, on the other hand, wasn't as good at keeping his composure. "When she turned the corner with her dad, I was overwhelmed, and the closer she got the more beautiful she got," Chris tells PEOPLE. "I don't know if it was the sun radiating or her, but either way I was sweating."

Among the guests were Kings of Leon drummer Nathan Followill, Rascal Flatts' Jay DeMarcus and Kid Rock, who both sang at the reception, along with Holly herself, who serenaded her groom with Stevie Wonder's 'Signed, Sealed, Delivered, I'm Yours.' The newlyweds' first dance was to Emmylou Harris and Mark Knopfler's 'I Dug Up a Diamond' -- a special song for the couple, as Chris buried the engagement ring on a scavenger hunt that led to his proposal earlier this summer.

As for her dress, Holly may not get it cleaned. "The grandkids will think I was a wild one," she laughs.