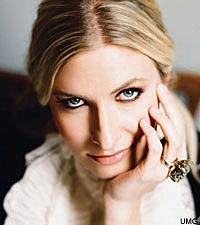 Country music is all about storytelling -- and three generations of the Williams family have given us some of the most dramatic, inspiring and heartbreaking stories of all time.

In 2006, Holly and her sister Hilary were involved in a harrowing, near-fatal auto accident -- a near-tragedy that seems eerily similar to their dad's horrific fall down the side of a Montana mountain in 1975.

Just one mile before the accident, Hilary suggested to Holly that she buckle her seatbelt. "It was a sunny day and I had my feet out the window," Holly tells CMA Close Up. "I usually didn't wear my seatbelt, I guess maybe because everyone said you had to."

While Holly's injuries were visually more severe than her sister, she says that when Hilary was found at the scene, "she was medically dead. Her blood pressure was 55 over 0. She was blue."

Unlike their dad, who endured extensive facial surgery after his accident, Holly says neither of their faces was damaged, but their injuries were still devastating. "It was like an angel was covering our faces. But when I first saw myself, my head was so swollen up I didn't recognize myself. Mine was more gore. There was no white in my eyes. It's a wonder I didn't have brain injuries. I have all these scars on my head and in my hairline. They tried to shave my head but I was like, 'No!' I was pulling glass out of my head for about a year."

Holly says her mother, Becky, and her dad spent untold hours with both their daughters during their respective hospital stays. "It was good for my dad that he had that experience with the mountain fall," she notes. "He was so helpful. He would sit at the bedside for 24 hours."

Echoing the words of one of her grandfather's most famous songs, 'I Saw the Light,' Holly says, "I did see the light and have a 'come-to-Jesus' moment" -- a moment which led her to pen the beautiful 'Without Jesus Here with Me.'

Holly is now touring in support of her new album. Her sister continues to recover and is also working on writing and performing her own music.