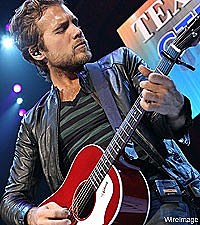 Gloriana continue to prove why they won't be an opening act for long. The audience at the sold-out May 14 show at New York's Nassau Coliseum was packed with people in their seats well in time to see the foursome take the stage, as they opened for Taylor Swift on her Fearless tour. And the cheers were deafening.

The band impressed the eager, mostly female audience with a high energy performance, often encouraging clapping and cheering with lines directed at all the girls. "Where my ladies at tonight?" asked Gloriana's Cheyenne Kimball, eliciting a room full of screams.

The group -- Cheyenne, Rachel Reinart, Mike Gossin and Tom Gossin -- opened their set with 'How Far Do You Wanna Go?,' using the song as the perfect opportunity to pay homage to one of their influences. Mid-song, Gloriana segued into the chorus of the Fleetwood Mac classic 'Go Your Own Way.'

They started their second song of the set, 'If You're Leavin',' with a four-part acapella harmony, continuing on to play 'You Said,' their latest single 'The World Is Ours Tonight,' and their debut hit, 'Wild at Heart.'

Gloriana, whose video for 'How Far Do You Wanna Go?' is nominated for a 2010 CMT Award for Group Video of the Year, will continue to tour through the summer and fall. Click here for tour dates.