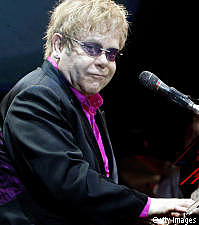 Sir Elton John is one of the pioneering pop icons of the past four-plus decades, selling more than 250 million albums. But now he says he's through making the records that made him famous. To prove his point, he's teamed up with country legend Leon Russell and one of Nashville's best-known producers, T Bone Burnett, to collaborate on his latest project.

"I don't have to make pop records any more," he tells Billboard magazine. "The world isn't screaming for another Elton John record and I'm not screaming for it either unless it's going to be different. In the '70s, '80s and '90s, the record companies always said we had to have a single and I think I fulfilled my brief. But at 63, the singles chart isn't one I'm going to be in very often. To me now, it's all about writing albums and trying to be mature."

Working with Leon more than 40 years ago as they toured the United States together, their reunion, Elton hopes, will bring the man he describes as his "idol" back into the spotlight. "There's no point doing this record if it doesn't bring his work to light," says the entertainer. "I want him to be comfortable financially. I want his life to improve a little."

The upcoming 16-track CD, entitled 'The Union,' was recorded live in studio with Elton and Leon on dueling pianos. It also includes the creative input of Elton's longtime songwriting partner, Bernie Taupin, as well as guest vocals by Neil Young and Brian Wilson. The album will hit shelves on October 19. Meanwhile, Elton says his future plans include touring with Leon, as well as doing a follow-up album together next year.