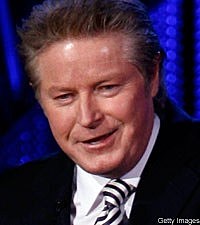 The Eagles continued their successful migration into the country world this past weekend, headlining day-one of the second annual Stagecoach Festival. While classic Eagles fare such as 'Tequila Sunrise' and especially 'Desperado' have always been somewhat rooted in country, Don Henley tells The Boot the group's acceptance into the Nashville world "is a whole new universe for us."

The crossover actually began in earnest last year when the group headlined the opening of L.A.'s new Nokia Theater with the Dixie Chicks. Henley admits that the Eagles, who got a standing ovation when they played the Country Music Awards, have been able to speak unfettered while others have not.

"I think people expect us to do what we do, and where other people might not be able to get away with it -- like our friends the Dixie Chicks, bless their hearts -- we get away with it," Henley tells The Boot. "I've said some outrageous things about Bush in the press. Every time I do an interview and they ask me who I would like for President this time I say, 'Any of the front-runners would be fine with me, because frankly a f---ing chimpanzee would be an improvement.' I've said that numerous times in the press and nothing has come of it."

Why does Henley think the Eagles have been unscathed by his frankness? "The fact that we can go play the Country Music Awards and get a standing ovation when we've just put out an album with songs like 'Long Road Out of Eden' and 'Frail Grasp on the Big Picture' on it, which talks about politics and religion in a very what one might call leftist sort of way, is really sort of a mystery to me," he says, laughing. "But we get away with it. I don't know if people just ignore that part of it because they love the old stuff so much -- maybe we've just made such a deep inroad into their hearts and minds that they forgive us when we do something that offends them."

There is something to be said for longevity for certain. But Henley believes there's more to it than that. "The world of country music is changing," he says. "There's still a very right-wing conservative element to it, but I think underneath that there's a whole new paradigm emerging in Nashville and country music that is more centrist, if you will."