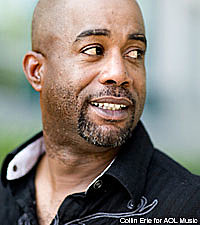 Going country has been as good for Darius Rucker's marriage as it has for his career. Previously, Rucker's wife took his songs quite personally. "She used to think that every song I wrote was about us," he says. "I used to have to explain, 'It's not about us, honey'." However, one listen to 'All I Want,' a hilariously playful rant about just wanting to be left alone, and Rucker knew the spell was broken. "I took that one home, and I was really worried 'cause I thought she'd say, 'Oh, you want to get divorced?' And when I played it she was just laughing so hard."

Just as his music has been a hit Chez Rucker, so has it been at country radio. The bittersweet 'Don't Think I Don't Think About It,' the first single from his debut country CD, 'Learn to Live,' is knocking up against the top spot on the country singles charts. Immediately following his AOL Sessions performance, Rucker talked with The Boot about his love for country, his future with his Blowfish brethren and his obsession with a certain Carrie Underwood song.

Why did you want to make a country record?

I've listened to country music my whole life and talked about it for so long. The Hootie thing was winding down, and I got offered the record deal by Capitol and it just seemed perfect. Country music is as big a part of my life as R&B and rock 'n roll.

What artists influenced you as a kid in South Carolina?

Buck Owens was always big. I remember hearing 'Act Naturally' on the radio and that it was the guy from 'Hee Haw' and being so happy because you felt like you knew him. Then I got a little older and Radney Foster, Dwight Yoakam, Nanci Griffith, New Grass Revival -- those are the bands that I would listen to every day. Their records were such a big part of my young adult and teenage years that I can't help but to make a country record, really. 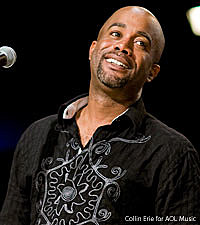 What's the difference between a great pop song and a great country song?

In today's music, you have a great chance to have what's considered a great pop song if you have a great beat ... What you say on it could be pretty minimal. In country music, if you don't have a song that moves people and says something to people and really has a story to it, I just don't think you're going to get your record played. That's why I love being in country music. There's still a place where I can write songs.

'Don't Think I Don't Think About It' is a beautiful tale of regret. Who is it about?

Nobody from my point. Clay Mills had this great idea. Most love songs like that are just about the person dying and pining for them, waiting on them to come back, and we really wanted to make it known that this guy was fine, but he just heard this girl was getting married and he was thinking about her. I really like the song 'cause it's not so sappy or anything. No matter how happy you are in your life, if you're happily married, if you hear one of your exes is getting married, you think about -- not that you want them back or anything, you just think about it.

Did your family have a lot of influence on this album?

Totally. Everything about making the record had to do with my kids or my wife. Music used to be the most important thing to me and it's not even a close second to my family anymore.

Is there any part of that super sonic ride that you miss from the Hootie days?

Do you know what I really miss from the Hootie days? I miss when the four of us were riding in a van and we were the four best friends in the world. That was when everything was great and we were inseparable. We'd be on the road for three weeks and come home and two hours later, everybody will be calling each other, 'Where we gonna go?' 'Where we gonna meet?' We grew up and grew apart and got married and had kids, and even when we play now we're not as close as we were. I don't miss the getting big or all that stuff or having to go play. I miss when we were really close.

You would think you would be so happy to get done with those days of struggle.

The struggle was the fun part. We didn't realize we were struggling; we were just playing music. It was one of those things even when you were figuring out how am I gonna pay rent, it didn't matter because I was playing music for a living. 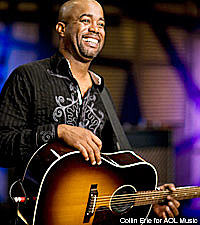 What's the hardest part about starting all over again in a different genre?

The hardest part is all the traveling you have to do to get your foot in. I think I went to like 80 radio stations in 6 weeks. That was something I had never done before. That was the hardest thing -- the traveling, being away from your family; but all the other stuff -- meeting people, meeting program directors, all that stuff I love.

You made your Grand Ole Opry debut a few weeks ago. What was that like?

That was one of the four greatest musical moments of my life. Hootie tried to play the Opry for years and it just never happened.

What are your other three?

Playing the Apollo was an amazing one. The Billboard Music Awards, when we played with Al Green, that was still probably the greatest musical moment in my life. And the other one was we played MerleFest in North Carolina, and we wanted to jam with Doc Watson, so we sat around for three hours and just picked with Doc Watson. That was unbelievable.

The guests on this album include Brad Paisley, Alison Krauss and Vince Gill. What was it like being in the studio with each of them?

Being in the studio with Brad was really incredible just because he's such an amazing player. To have Alison Krauss and Vince Gill, they're both so nice and laid back. I remember the first time I heard them together, it was just like angels. I always feel that we have 38 Grammys between [the four of] us, and I've got 2, and those people are cool enough to give me their time. I just thought that was awesome.

Do you think there's still a racial barrier in country?

There might be, but there's not a racial barrier for me. I mean, people play on my record, people accepted me and I wasn't looking at it that way. Charley Pride's already done the ground work. All I got to do is play. 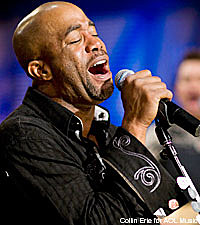 You've been quoted as saying that your motto for making this record was, "the countrier the better." Did you meet any resistance from anyone on that?

There's a funny story about us finishing the first fo
ur songs. Capitol was great, and they told me I could do whatever I want, but I was sitting with Mike Dungan who's the president of the label, and he said, 'Man I love these songs, but can the next ones not be so country?' I was like, 'Wow, Darius Rucker is too country for country radio. That's funny.' We laughed at that, and we went ahead and made the record we wanted.

Is there a song by someone else that's stuck in your head now?

'Letter to Me' by Brad Paisley. I really wish I had written that song. 'Last Name' by Carrie Underwood, Wow! It's just a great, great song. I'm such a big Carrie fan, and I think 'All-American Girl' was going to actually be in my set, believe it or not. My band always laughs at me, because we were putting it together and I told my band leader that if I walk into rehearsal and they can't play 'All-American Girl,' everybody's fired.

What is the status of Hootie and the Blowfish?

Hootie played our last show [Aug. 26] for years. We have four charity gigs that we do every year, but we will not do a record or tour for five or six years -- until I do three or four country records.

Do people still stop you on the street and call you 'Hootie'?

Not very often anymore, but if they do I'm glad 'cause they still know who I am! I'm down with that. After being in the limelight for 15 years, you're just glad that people still know who you are, especially when I've lost some weight and I'm not the fat hippie anymore.

Filed Under: Darius Rucker
Categories: Interviews
Comments
Leave A Comment
Back To Top