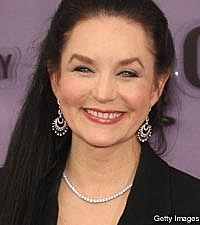 Crystal Gayle takes another step in her long career, and this one will have fans stepping on her! The long-haired lovely joins an illustrious group of country artists -- not to mention other entertainment legends -- to be honored with a star on the Hollywood Walk of Fame. The singer, who crossed over to the pop charts in the late '70s with hits such as 'Don't It Make My Brown Eyes Blue' and 'Talking in Your Sleep,' is being given the 2,390th star, which will be located on Vine Street near Sunset Blvd.

Tanya Tucker will be the guest speaker at the official dedication on Friday, Oct. 2. According to officials, Crystal's star will be located near her sister, Loretta Lynn's star.

Alan Jackson and Brooks & Dunn are among the acts who've most recently been honored with a star. Cowboy film and country-music legend Gene Autry has five stars on the Hollywood Walk of Fame!