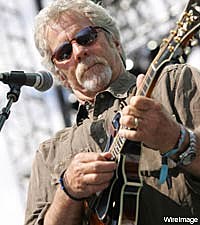 Chris Hillman is a pioneer in the country rock movement. The singer/songwriter -- formerly of The Byrds, the Desert Rose Band and the Flying Burrito Brothers -- recently took that signature sound to Edwards Barn near Nipoma, Calif., staging a benefit concert for a local church. While there, he recorded the show for a live CD which will be released in 2010 on Rounder Records.

Chris recently spoke to the Los Angeles Times, reflecting on his career and where it has brought him today. "For someone my age who has come through 47 years in the music business, what are your options?," he says. "Unless you're Bruce Springsteen or somebody on that level, you make your own album; you pay for it and try to sell it ... that usually means at your shows or on your website."

Chris, together with the late Gram Parsons, was integral to the burgeoning country rock movement of the '60s. Then in the '80s, he fronted the Desert Rose Band, making a few trips to the upper reaches of the country charts. Now he's content to craft his own brand of music and tour with friends and peers like Herb Pedersen, who was at Edwards Barn when Chris recorded the upcoming release.

"This place has such great ambience," Chris says of the venue he previously played for an earlier benefit. Herb adds that the two had wanted to record an album there the very first time they played there.

"We started doing this [benefit] a few years ago," says Herb. "Then we were playing a show in Massachusetts and Ken Irwin of Rounder Records was there. It was just Chris and me, doing a little workshop. He said, 'What are you guys doing here?' After he heard us, he said, 'I'd love to get a live record of this sometime.' So here we are."

The album will include cross-section of tunes from the Byrds 'Turn, Turn, Turn' to the Buck Owens classic 'Together Again.' Newer material written by Chris and frequent co-writer Steve Hill, with whom he has been penning tunes for more than 20 years, will also be featured. One such track, of a more spiritual nature, is 'Our Savior's Hands,' which Steve says is one of the best songs the two have ever written together.