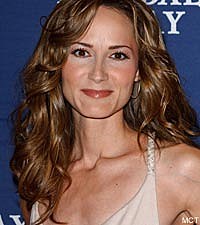 Chely Wright is still dealing with the aftermath of her surprise announcement a few weeks ago that she is a lesbian. But while many of her fans may have been caught off guard, the singer says she spent years preparing for the impending storm.

"It may seem from an outsider looking in, a straight person, like, 'Why do gay people have to make a big deal about coming out?'" Chely tells Nashville's Tennessean newspaper. "But not a lot of people are murdered for being straight. Not a lot of people are unfairly fired for being straight ... And I can't think of one person who was ever denied their dream of being a country music singer for being straight. I had fantasies of walking out at shows and saying, 'Thank you all for coming out to my show tonight, and I just have to tell you all something: I'm gay.' Because tending to my secret was a big, big job, and it about killed me."

It was only after Chely came precariously close to taking her own life that she moved from conservative Tennessee to Manhattan, and began coming to peace with who she really was, including accepting that she would lose a large portion of her fan base.

"There's a reason no one comes out in country music as an artist," she explains. "It's that I did a radio station interview in Modesto, Calif., and that two callers called in and said, 'We want her off the air. We don't like that.' It's religion. It's hard to sell a gay country artist to fans because it's largely steeped with conservative Christian record buyers, and we all know that. There is a reason that other [gay country singers] aren't coming out, and I don't blame those who haven't. I know why I hid. I like my job."

It took over three years after she moved to the Big Apple before Chely was ready to go public as a lesbian. But she says she spent all of that time carefully calculating her next move. "It didn't happen by accident, to come out on the scale I came out," she says. "There was a very cognitive thought process that went behind it ... I'm not going to tell you, 'Oh, I can't believe all this.' I can believe all this because I wanted it to be discussed in this fashion, and I wanted to do it correctly."

Perhaps it's because she took her time that she has received what she describes as "beautiful" e-mails from several fellow artists, including Trisha Yearwood, Jack Ingram, Faith Hill and Mary Chapin Carpenter. One artist who has not been so supportive, however, is outspoken John Rich, whose hurtful comments she chronicles in her new book, 'Like Me: Confessions of a Heartland Country Singer.' And while John denies Chely's claims, she stands by her account, but says she's ready to put the matter to rest. "How do they say it in the South?" she says. "I don't want to get in a pissing match with John Rich."

Now crossing the country as part of a media tour, including appearances on Oprah, the Today Show and the Ellen DeGeneres Show, the singer who was perhaps once best known for the No. 1 hit, 'Single White Female', says the wait to come out has been worth it.

"Now I'm really coming to terms," she says. "I'm mourning the death of perhaps what my music could have been ... I have no idea what my musical future will be. I have no idea where I will land, but i like to imagine I will hopefully deliver some of my best work. Time will tell, but I'm thrilled about the possibility of soaring."

In addition to promoting her new CD, 'Lifted off the Ground,' as well as her book, Chely is also getting ready for her 10th Annual Reading, Writing and Rhythm benefit. Held June 8 at the Polk Theater in Nashville, Tenn., the evening will include performances by Rodney Crowell, Justin Moore, Sarah Buxton and more. Click here for more information.