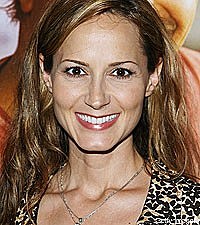 Chely Wright, who soared to the top of the country charts in 1999 with 'Single White Female,' and scored other country hits including 'Jezebel' and 'Shut Up and Drive,' has been absent from the country charts since 2005's 'The Bumper of My SUV.' Now she's making history as the first mainstream country artist to come out and publicly declare she's a lesbian.

"There had never, ever been a country music artist who had acknowledged his or her homosexuality," the 39-year-old Chely tells PEOPLE. "I wasn't going to be the first." But, she adds, "Nothing in my life has been more magical than the moment I decided to come out."

On Tuesday (May 4), Chely will release the memoir, 'Like Me,' detailing a personal journey which led to what she calls "a complete and total breakdown," a few years ago. She will also have a new album, 'Lifted Off the Ground' in stores the same day. Both the book and the album address not only her sexuality, but the difficult road she has taken to making music again.

In an exclusive interview with The Boot, Chely says, "I don't think that going through sh-- is mine and mine alone. Everybody goes through it, I just never had. I never had a breakdown or breakthrough or whatever anybody wants to call it. I'd never experienced that before. I'd always been quite adept at managing and compartmentalizing any things that came my way that felt like that. You've got to do that. When you have a job like mine you don't have time to have a breakdown. And for the first time in my life I found myself completely submissive to despair. It about killed me."

But if the adage 'what doesn't kill you makes you stronger' holds any truth for the Kansas-born singer, it also held a cache of remarkably personal and introspective songs, written during the experience as a way to cope with and ultimately emerge from the darkness. The resultant album, 'Lifted Off the Ground,' also being released (on Vanguard Records) on Tuesday, is nothing short of brilliant, and in many ways like nothing she's ever recorded or released throughout her career. A colorful window into the personal journey on which she's been, the songs subtly reference her coming out, but also address universal themes of alienation, sadness, bitterness, and anger. They also revel in hope, wonder, and new-found freedom and confidence.

Although she spends much of her time now in New York City, during the darkest days she experienced, Chely was still living in Nashville. She says now that the period of "despair" probably lasted four or five months.

"I think it's like food poisoning," she notes. "You can be really sick, but then there are moments where you've got your face on the tile of the bathroom floor, praying for God to take you. So even when you feel a little bit better, you're still terribly sick."

She confesses, however, that as far as friends were concerned, everything was OK. "People would ask and I would say, 'I'm doing fine.' You don't really invite people to parties like that."

Finding herself curled up in bed and clutching her guitar, Chely says music began pouring forth. "The good part of it is that what oozed out of me, musically, was the most true thing that had ever happened to me. I knew something was different."

Different indeed. Save for her distinctive voice, 'Lifted Off the Ground' will remind few of the radio-friendly 'Shut Up and Drive' or 'Single White Female.' Produced by Rodney Crowell, the disc openly flirts with the Country, Adult Contemporary, and Alt-Rock/Americana formats but neither caters nor condescends to any of them. Instead, the 11 tracks tell an honest and hopeful story with imagery and production that's fresh, exciting and completely unexpected -- from describing herself as "a big ball of pain in pajamas,' in 'Notes to the Coroner,' to dropping the F-bomb in the venomous 'Damn Liar.'

"It's magical how the minute I just submitted to the realness of my life and the reality of just giving in to pain and despair, everything in my life, the Technicolor got turned up in it," says Chely. "I started feeling and smelling and hearing things that I just don't think I was living."

On Wednesday, May 5, Chely will reveal more of her personal journey when she appears on the 'Today' show. PEOPLE magazine hits newsstands on Friday (May 7).