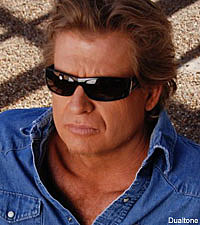 Listen to Charlie Robison's new album, 'Beautiful Day,' and you might feel bad for the guy. Talk to him, though, and you'll realize he's doing just fine.

"I guess you might call this my divorce record," Charlie, who split last year from the Dixie Chicks' Emily Robison, told The Boot, all the while maintaining a sly grin. The singer/songwriter often dubbed "country's bad boy" invited us for a chat on his tour bus just before opening for his buddy Robert Earl Keen at a sold-out New York City show. While we were a bit hesitant to open old wounds by asking about the divorce, Charlie nonchalantly brought it up before we did, explaining that the breakup of his marriage forced him to explore new creative horizons.

"When you go through something like this, it results in very fertile writing. It's very much me, yet a departure from anything I've done before," Charlie explains. "It's my first relationship-type record ... You can really tell where I was emotionally when I wrote it."

With songs like 'Yellow Blues,' 'Down Again,' and the album's first single, 'Reconsider,' Charlie packs quite the emotional punch on the record, singing from the perspective of a jilted lover pining for the one who got away. 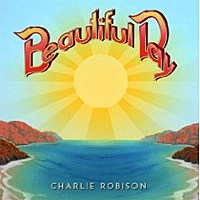 "If I tried, would you reconsider/Would you reconsider comin' home," he laments in the 'Reconsider' chorus. But, surprisingly, this was one of the few tracks on the album Charlie didn't write. Perhaps a song that gives a more introspective look into his current mindset on the divorce is one he did pen, the title track.

"'Beautiful Day' is an ironic title," explains the towering Texan. "The overview of the record is that it's a beautiful day, coming out of the fog on the other side. No divorce is good, but we managed to come out of it as still good friends. The song 'Beautiful Day' pokes fun at her. We both played big parts in [the divorce]. But that song, I just felt like that was her part."

"Well she's hanging down in Venice/With her Siamese cat/She's telling everybody/She's a Democrat," reads the opening lines of 'Beautiful Day,' which Charlie insists Emily loved from the first time she heard it. In fact, the way Charlie talks about his ex, was it perhaps one of the friendliest celebrity divorces ever?

"As far as I know, yeah," Charlie tells us with a laugh. "We were just together last night. If we're going to the kids' school, we'll say, 'Come pick me up' and ride together. And our friends will see that and say, 'You're so gonna get back together.' And we say, 'Nooooooo way, we're not.' We would never ruin the friendship we have now by getting married again!"

Those hoping to hear Charlie's brother, acclaimed singer/songwriter Bruce Robison, on the new project will be disappointed. Charlie didn't write or record with his younger sibling this time around, for somewhat the same reasons he's not getting back together with his ex-wife. 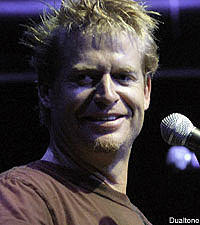 "We decided to continue to be brothers rather than try to pursue the collaboration thing again," Charlie admits, laughing. "We'll end up getting a few weeks into something and then will just about kill each other."

But reminiscent of his days writing and singing with Bruce, Charlie does include several lighthearted tunes on 'Beautiful Day' -- songs like 'Feelin' Good,' 'She's So Fine' and 'Middle of the Night,' which Charlie says is his turn to poke fun at himself: "You know those nights where you say you're just gonna have one drink? But then four days later, you wake up and you have no idea where you are?" he explains of the humorous inspiration behind that song.

Whether wearing his heartache on his sleeve or wearing out his bar stool, the good-natured Charlie is excited for fans to get a better glimpse into his personal life through this new music. It has certainly helped him weather personal storms.

"The undertone of the record is a sad one," he says. "But why I named it 'Beautiful Day' is because it's also redemptive."