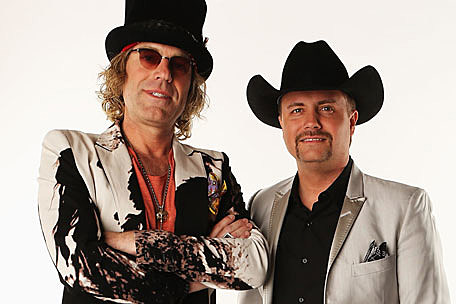 It may have taken almost four years for Big Kenny and John Rich to reunite for their fourth studio album together, but Hillbilly Jedi proves they didn't miss a beat.

In true Big & Rich fashion, the new album, out today (Sept. 18), mixes praying with partying, love with heartache, rebellion with redemption, and country with a dash of rock 'n roll. In fact, the celebrated country duo teamed with two of the biggest rock icons on the planet to write for the album ... one of whom had to pull some big Hollywood strings to help his Nashville buddies out with the project.

Co-writers on every track but one on Hillbilly Jedi, Kenny and John are understandably very proud of this album, and have just as big of an affinity for the one song they didn't pen. The Boot spoke with the musicians about some of the most personal lyrics on the album, becoming dads for the second time and why those years apart brought them closer together.

Given the solo ventures you both pursued during your time apart, was there ever a point where you questioned whether you'd ever reunite as Big & Rich?

Big Kenny: We both needed to do our own stuff, but we never stopped loving doing things together. We respect each other's individuality.

John: Kenny's been all over the world doing mission trips -- he could write a book about his last four years, it's incredible. And I've been doing everything from "Shuttin' Detroit Down" to "Celebrity Apprentice" ... (I have) two sons now. That's a lot of stuff to be going on during a "hiatus." John had to go be John, Kenny had to go be Kenny, and Big & Rich had to sit down and be quiet for a while. That's what needed to happen, and when we put this back together the connection was even stronger than it was before. There's a certain chemical reaction with us when we're singing, everyone around us can feel it. We couldn't tell you what it is, but we can just tell you it's there. It's a buzz that happens between us.

The album's poignant first single, "That's Why I Pray," was written by Sarah Buxton, Blair Daly and Danelle Leverett and is the only song on the album you two didn't co-write. You rarely cut outside songs, so you must've been really compelled by this one.

Big Kenny: John found the song and played it for me on the bus. I was blown away; it hit me hard. I thought, "If this moves me, it's going to move a lot of people." What a great reminder to be thankful and to always believe that things are going to get better.

John: That song is what country songs are supposed to be about. You can't say it any better than that song. I wish we could've written it, but it's OK that we didn't. Two or three years ago, I bought Willie Nelson's box set, which probably had 200 songs on it. I started looking at all the credits, assuming Willie wrote everything he ever sang. But he didn't write "You Were Always on My Mind" and actually a bunch of other stuff. Same with Johnny Cash, Waylon [Jennings] ... So it dawned on me one day that you don't have to write everything you sing to be a true artist. When you come across a song like "That's Why I Pray," it's so special that you need to cut it. I don't care if zoo animals wrote it! You record it because it's such a powerful, special song.

It sounds like it was written just for you guys, though. I'd be surprised if Sarah Buxton didn't have you in mind.

John: Well, wouldn't that be nice if Sarah Buxton had me in mind! [laughs] We're big fans of her. Kenny and I have loved her since she was right out of Belmont [University]. She would come out to Muzik Mafia shows back then. 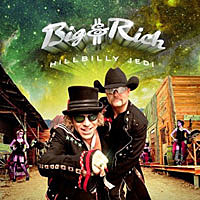 How did the Hillbilly Jedi title come about?

Big Kenny: John and I went up to New York to write with Jon Bon Jovi and Richie Sambora, and that's when we wrote "Born Again" and "Can't Be Satisfied." After we'd finished writing the [title track], we were sitting around playing it and Jon Bon Jovi says, "Hillbilly Jedi? I'd buy that T-shirt!" But then the label told us we needed to start thinking of other things, since "Hillbilly Jedi" might be a (copyright) issue.

So we went back up to New York and told Jon what the label said. He said, "What do you mean an 'issue'? I'll just call George." We said, "George who?" He said, "George Lucas! He's a friend of mine." The next day, when I got off the plane, the first text I had was from Jon Bon Jovi. It said, "Done." Two weeks later, we had a letter from Lucas himself, giving us the rights to use 'jedi.'

You mention "Born Again," which is the album's opening track and sounds pretty autobiographical for all four of you. What's the story behind it?

John: The first lyrics on the album, on "Born Again," are "Have you missed me? I ain't been gone. I've been making little babies, I've been writing big songs." Those are the first words you hear after a three and a half year hiatus of recording with Big & Rich. We wanted to start the record with where we've been, what we've been doing.

Big Kenny: It's amazing that two guys like John and me would run into guys like Jon and Richie. Back in 2004 when they were in Nashville, we kept trying to hook up to write. We finally met up with them at a charity event and met up to write the next morning. Since that point, they have been friends and mentors to us. They really have been through a lot of the same stuff. So that song was written very honestly. Everyone needs to feel confidence, like they are Superman and can jump over tall buildings.

Are you hoping one of the Bon Jovi collaborations will be a radio single?

John: We'd love tour with Bon Jovi ... We'd live in their spare bedroom if they'd let us! They've been like big brothers to us and have mentored us. What I'm looking forward to is getting this record out and seeing what the fans are gravitating towards. If that's one of the songs we wrote with Bon Jovi, then that would make me really happy.

What's a song on the album that is particularly personal to you?

John: When Kenny played that song for me, I laughed my head off. No dude has ever learned how to play guitar with anything other than getting chicks in mind. In the beginning, it's not because you want to be a country star that you learn to play, it's because you want to meet chicks!

Big Kenny: Then there's a song called "Lay It All on Me" -- it's between a man and a woman, but also a song just about life. I love the earnestness and the sensuality of it, and John's never sung a song better.

John: That's a nice compliment! For me, "Last Words" has special meaning because I got to write it with my ultimate songwriting hero, Sharon Vaughn. She wrote "My Heroes Have Always Been Cowboys"! I've learned more from that woman about writing songs than from anyone else in the world. I love what the song says, too. It's a classic country thing in that it's saying, "Hey baby, let's not go to bed mad." But it says it in a really artistic way. And it sounds like Roy Orbison meets Queen!

The ballads are certainly balanced by the uptempo, party songs. Did you write a lot of this album with your live show in mind?

John: Our albums and live show have always gone hand-in-hand. I see pyro and light shows when I'm writing! I just see stuff exploding on stage. Our album is a road map to the show.

In your time apart, both of you have become second-time fathers, both welcoming baby boys to your brood. How are the big brothers adjusting, and how are you doing juggling fatherhood with this new album's promotion?

Big Kenny: Lincoln (BK's oldest son) loves it! He's such an awesome kid. We get reports from his teacher that he makes the other kids laugh all the time. He loves being there. And our youngest, Dakota, he's the happiest little dude I've ever met. He learned how to swim this summer ... John and I can do this because we both have the most wonderful, loving, patient wives in the world.

John: Just before this interview, I was on "FaceTime" on the phone with my son, Cash, watching him run around the house in a Superman outfit. The past seven weeks, I've been home two days. This show I'm doing, "The Next," we were shooting while simultaneously doing the Big & Rich tour. So I'd shoot the show Sunday, Monday, Tuesday and Wednesday. Then Wednesday night, I'd go meet the tour and we'd do shows Thursday, Friday, Saturday. Then I'd have to take off and go to wherever the show was taping on Sunday ... and this went on for seven weeks! My kid is starting to go, "Where is he?" But thank God, at this point in my career, these will be rare periods of time when I'm gone like that.

I remember back in the Lonestar days, watching Richie (McDonald) -- he had kids before any of us, and he'd get a horrible look on his face when he'd come up on the bus. And we're all having a big time! But he'd just go up on his bunk and pull the curtain. Now I understand that. It changes your perspective. I want to win and do stuff that counts, so it hasn't softened me on a professional level at all. But it's absolutely changed me on a personal side ... and I needed that! [laughs] Most people would say, "John Rich, you need to calm the hell down." And they'd be correct!