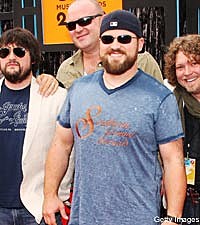 debuted part three of the documentary, 'Those Who Serve,' which followed them on their recent USO tour in the Persian Gulf. The film features the band performing for the troops, and meeting individually with men and women in uniform stationed far from home and sharing their personal thoughts on the experience. You can now see all three videos at the Ram Trucks Letters for Lyrics website.

And speaking of letters, more than 144,000 have been collected so far in the Letters for Lyrics campaign, which officially got underway on May 10, with the goal of rallying people to write one million letters for servicemen and women stationed abroad. In return for their letter, each letter writer takes home an exclusive CD. 'Breaking Southern Ground' features three new songs from the Zac Brown Band, as well as music from Sonia Leigh, Nic Cowan and Levi Lowrey, who are also signed to Zac's label, Southern Ground.

All U.S. Ram Truck dealerships will are now serving as collection points and also providing letter-writing stations. The letters will also be collected at the band's shows, after which Soldier's Angels will deliver letters to U.S. troops on behalf of Ram Trucks and the Zac Brown Band. Soldier's Angels is a volunteer-led organization with over 225,000 members providing aid and comfort to the men and women of the U.S. Army, Navy, Marines, Air Force, and Coast Guard, along with veterans and their families.

Next up for the Zac Brown Band, on July 1 they'll join Jimmy Buffett, Kenny Chesney and Sonny Landreth for a free concert from the beach at Gulf Shores, Ala. The show, in support of the people, businesses and culture of the Gulf Coast, will air on CMT, Thursday, July 1, at 8:00 PM ET.