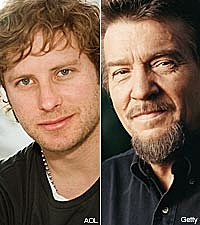 A few good ole boys and girls are coming together to record a tribute album to the late Waylon Jennings. Jessi Colter, Waylon's widow, says she's already heard some of the tracks and promises, "It's going to be an incredible album. It's a very organic, heartfelt tribute, unlike any other tribute album."

Among the artists who've contributed is Dierks Bentley. Jessi raves about Dierks' take on 'Lonesome, Or'nry and Mean,' saying, "He did a real gravely voice version that is to die for. I called him and said 'Dierks, you just really broke my heart singing this song.'"

Jessi and Dierks, who are both from Arizona, have also struck up a friendship. She recently participated in Dierks' Miles for Kids motorcycle ride in Phoenix. "We've passed each other in concerts and things. He's called me several nights and said 'Let's write!' So I said 'OK, let's write.' I called him several times to see if he was out on the streets because I was out there checking out our local talent. So we're becoming buddies."

Others who have already agreed to participate in the album include Trace Adkins, ZZ Top, Bob Seger, Sheryl Crow, Kris Kristofferson, Patty Griffin and Waylon and Jessi's son, Shooter Jennings.

"Patty Griffin did two incredible songs, and Kris did two songs. Waylon is on it too, doing new tracks," adds Jessi.