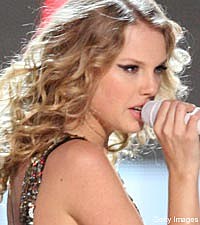 Taylor Swift is the first performer to be confirmed for MTV's 2009 Video Music Awards.

"I'm so excited that MTV and the VMAs have invited me to perform, because I think this year's show will be unlike anything they've ever done!" Taylor says.

The 19-year-old superstar is also excited to shake things up on the notoriously unpredictable show.

"I love incorporating theatrics into my performances, and the VMAs have always allowed artists to run with that," Taylor says. "MTV has been so good to me, and I could not be more excited about this year's VMAs."

This will be Taylor's first ever performance on the VMAs. The show airs September 13 on MTV, with British comedian Russell Brand hosting for the second year in a row.