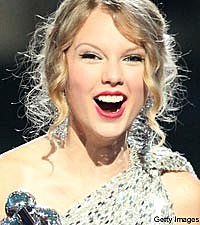 Taylor Swift joins a elite group of 2009 newsmakers, as one of NBC's 'People of the Year.' In a special to air Thanksgiving night, host Matt Lauer will spotlight the most fascinating, inspirational, heroic and notorious figures -- and the most-talked about stories of the year.

For her part, Taylor's year has been nothing short of phenomenal. She ...

-- was named the youngest-ever CMA Entertainer of the Year at age 19.

-- is the year's biggest-selling artist in all musical genres.

-- has the longest-charting album of the 21st century.

-- hosted and was the musical guest on 'Saturday Night Live.'

-- created a global sensation with the sold-out 'Fearless' tour, which continues in 2010.

-- launched a line of signature guitars and greeting cards.

-- filmed her big-screen debut in the comedy 'Valentine's Day.'