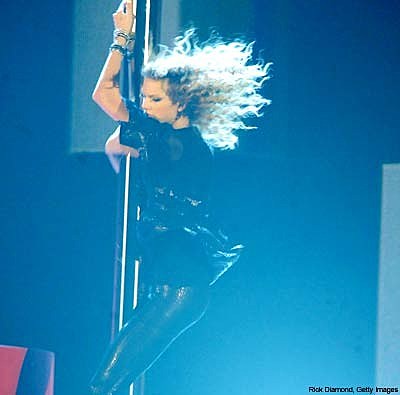 Next month, Taylor Swift will no longer be a teenager. The country superstar turns 20 on Dec. 13. And after her performance at the CMA Awards on Wednesday, some are wondering if leaving her teens behind might mean leaving her squeaky clean image behind, as well.

Singing her new song, 'Forever and Always,' Taylor -- clad in skin-tight black leather pants, knee-high boots and a flowy silk blouse -- added a bit more choreography to her performance than usual, even sliding down a pole! What did you think of the performance from the 43rd Annual CMA Awards' top winner of the night? Watch it below, then let us know what you think!

Looks like Taylor is growing up! But we have to say, her role model status is still good in our book.

Filed Under: Taylor Swift
Categories: CMA Awards
Comments
Leave A Comment
Back To Top
Garth Brooks' 'Stand' on CMA Ent. of the Year 'Is Still the Same'