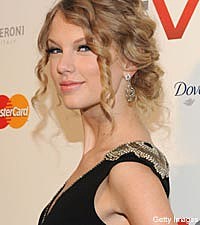 Taylor Swift might seem to have it all -- successful career, worldwide fame, huge bank account -- but she admits she still battles insecurity.

"I definitely have body issues, but everybody does," she tells MSN. "When you come to the realization that everybody does that -- even the people that I consider flawless -- then you can start to live with the way you are. I've read interviews with some of the most beautiful women who have insecurities. And you look at them and you're like, 'How do you have? Name one thing wrong with yourself,' and they could name a handful."

But even though the 20-year old admits she doesn't always love herself, she also says she hopes her self-esteem improves over time. "I don't really want to be that way," she acknowledges. "I'd like to try to maintain confidence and stay OK with who I am because I don't really want to change it. Everybody has insecurities -- everybody -- but hopefully you can overcome them."

Taylor, who just won the People's Choice Award for Favorite Female Artist, is also nominated for eight Grammys. Recently named Billboard's 2009 Artist of the Year, her record-breaking Fearless tour continues in 2010, along with opening acts Kellie Pickler and Gloriana.