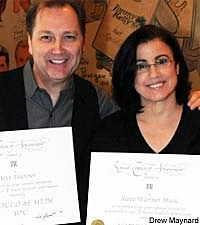 Steve Wariner has achieved Million-Air status, not in monetary terms but in number of airplays 11 of his songs have had on radio. The country star was recognized for four additional songs achieving that status during a special lunch in Nashville.

Steve told The Boot he was overwhelmed when BMI's Jody Williams recounted some of the statistics about Million-Air tunes. Each song, when played a million times back to back, would be the equivalent of six years of continuous radio airplay.

"It really is awesome to sit here and listen to everything Jody was saying," Steve said. "I have to acknowledge my co-writers and the people who recorded the songs – Clint Black, Garth Brooks and Keith Urban – because without them I wouldn't be invited here to accept these certifications."

Co-writers Roger Murrah and Rick Carnes were on hand to help Steve celebrate, as was his son Ross and his wife Caryn (pictured above with Steve), who acts as his publisher. Rick joked with Steve during the luncheon, telling him "I can't get away from your music, man. I was in Kroger the other night and I heard your Christmas song playing! What is that about?"

The singer/songwriter admitted that an interesting moment in his life was when he was on an elevator in Los Angeles, humming along to a familiar melody. "All of a sudden I realized the melody was familiar because it was one of my songs! That was the first time I'd ever heard my tune on Muzak!"

Steve, who began recording in the '70s, has had hits in all three of the previous decades. Jody called him "the quintessential combination of artist, musician and BMI songwriter," adding ' "I also want to point out that Steve is one of the few singer/songwriters who has held onto his own copyrights. That is a rarity in today's music business." Jody also reminded the gathering that Steve has a GRAMMY nomination this year for Best Country Instrumental Performance for 'Producer's Medley' from his Chet Atkins tribute album.

Jody also noted that Steve has now reached a plateau among songwriters at BMI, joining the ranks of such singer/songwriters as Hank Williams, Jr., Randy Owen of Alabama, Steve Winwood, Chuck Berry, Stevie Nicks and Mike Love of the Beach Boys, who have also achieved 15 Million-Air status.