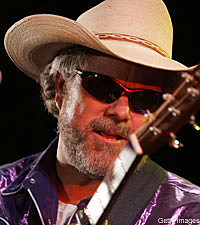 Trailblazing Texas singer-songwriter Robert Earl Keen, often referred to as the "father of Americana music," will be the focus of a live 2-CD set due for release on January 6. More than a dozen young Texas-based acts, who've been influenced by Keen's unique artistry, were brought together by the Center for Texas Music History at Texas State University, to perform at last winter's annual MusicFest in Steamboat Springs, Colorado.

The live CD, 'Undone: A MusicFest Tribute to Robert Earl Keen,' is being released in conjunction with the 20th anniversary of Keen's classic party song, 'The Road Goes On Forever.' Among the artists paying tribute to Keen on 'Undone' are Cross Canadian Ragweed's Cody Canada, Todd Snider, Randy Rogers, Roger Creager, Cory Morrow and Reckless Kelly. The collection also features Keen and his band performing some of his best-loved tunes, including 'Dreadful Selfish Crime,' 'Wild Wind,' 'For Love,' and the first recording of a new song, 'Goodnight Cleveland.'

Dickson Productions, coordinators of the concert and CD, will donate a portion of the proceeds from the sale of 'Undone' to benefit the non-profit educational Center for Texas Music History, the only university-based program devoted to the preservation and study of the musical heritage of the Lone Star State.