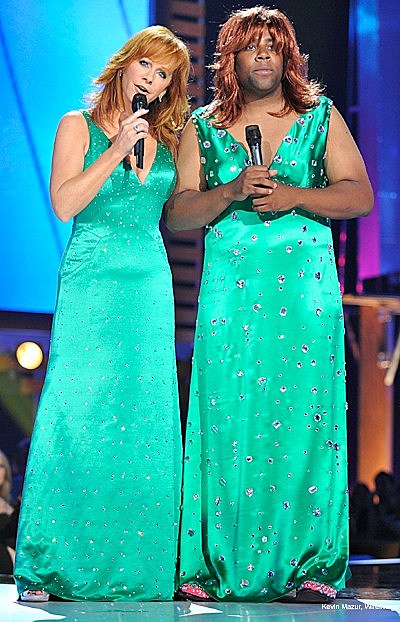 When CMT Music Awards host Kid Rock announced a surprise performance by the "Queen of Country Music" during Wednesday's live broadcast, the audience certainly wasn't expecting that "queen" to be in drag! But out came 'Saturday Night Live' comedian Kenan Thompson dressed as Reba McEntire, whom he has impersonated (albeit very loosely) on the show.

Fake Reba started to sing the redhead's recent hit, 'Consider Me Gone,' but was interrupted by Real Reba, dressed exactly alike in a floor-length green gown.

"What are you doing?" Reba asked Kenan.

"Who the hell are you?" he replied.

"Who are you?" Reba deadpanned. "You look like Kenan Thompson, who I heard has been impersonating me on 'Saturday Night Live.' Aren't you embarrassed of yourself?"

"Yeah, I'm embarrassed someone showed up in the same dress as me," Kenan answered.

"Not the same size!" Reba fought back. "You can't be Reba. You're too dark ... I'm ginger with highlights and you're a solid auburn!"

Kenan has done several sketches on 'SNL' dressed as "Reba." Watch one of the hilarious videos here (but parents be warned -- it's racy!). And in the wake of her cross-dressing doppelganger's debut on the hit NBC comedy, Reba's fans have started campaigning to score her a coveted spot hosting the show. The "Reba McEntire to Host SNL in 2010" Facebook page now has more than 2,000 fans. 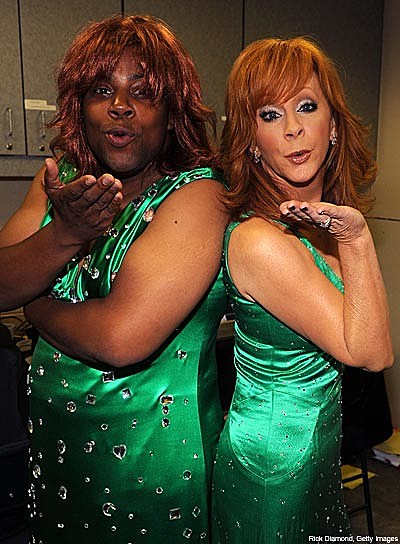