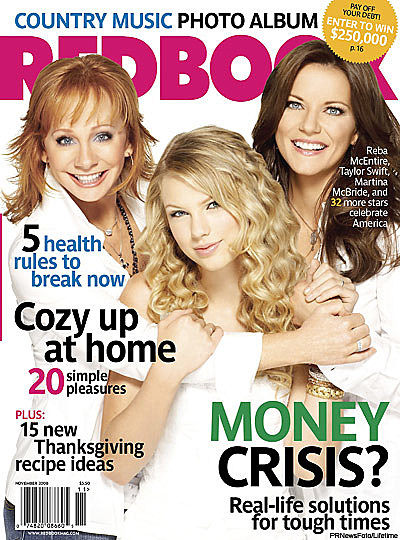 Reba McEntire, Martina McBride and Taylor Swift share the cover of the November issue of Redbook magazine, in an effort to encourage millions of women to vote. Every Woman Counts is a nonpartisan, year-long campaign launched by Redbook and the Lifetime TV network, aimed at empowering and engaging women in the political process, as voters and even as future candidates. The trio will also be among the number of country stars appearing in public service announcements called 'Vote (For Your) Country,' airing on Lifetime through the November 4 presidential election.

The project proved especially meaningful for Taylor Swift. "The first thing I did this year on my 18th birthday was register to vote," she reports. "I was still in my pajamas and I got on my computer and registered. It was so cool and empowering. I felt this sense of responsibility that I've never felt before -- I actually had a say in the political decisions of my country."

"There are people in foreign countries who stand in line all day just to be able to vote, and when people here take it for granted, I think it's a shame," said Reba. "If you have a gripe, you have the right to voice it and try to fix it by voting."

Proud to be involved in the effort, Martina said, "I sang the national anthem at the first Monday Night Football game after 9/11. I will never forget hearing 70,000 Americans who were as hurt, confused, and proud as I was sing the words. The compassion, faith, strength, and determination I saw in that time of fear and uncertainty changed the way I view this country forever."