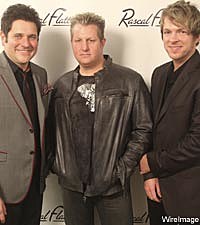 Rascal Flatts played a big part in making a lot of dreams come true for local children in need, along with the alumni of Ohio State University, last week at their annual fundraising gala. The band helped raise one million dollars for the Central Ohio chapter of the Make-A-Wish Foundation. The were joined by OSU alum Kirk Herbstreit and other notable alumni, according to The Lantern.com. The evening's events included a dinner, a live auction, and an acoustic performance by the trio, playing such hits as 'Fast Cars and Freedom,' 'What Hurts the Most,' and 'Life Is a Highway' (during which they were joined by the OSU cheerleaders onstage).

The local Make-A-Wish children were invited onstage as the crowd sang along to the final song of the evening, 'My Wish.' The event was the second annual "Big Wish Gala" the school has hosted, and both Flatts members Gary LeVox and Jay Demarcus hail from the Columbus, Ohio area. The band kicks off its American Living Unstoppable tour next month in New York.