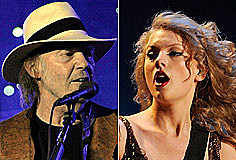 As the most downloaded artist according to iTunes, it's a fair assumption Taylor Swift has her share of unlikely admirers. During a press conference at the Country Music Hall of Fame, rock legend Neil Young confessed his fascination for his fellow songwriter.

"I like Taylor Swift. I like listening to her," Neill says. "I kind of like watching her respond to all the attacks. I like the ways she's defining herself. So I keep my eye on it."

Much like Taylor, who has experienced an unprecedented level of crossover success, Neil prefers to push boundaries creatively, and resists the industry's desire to pigeonhole him into one particular genre.

"I don't like boundaries," says the 'Harvest Moon' singer. "They don't really work. They do for some people. It all started when they started formatting radio and separating things into different little areas that they could talk about, and then restricting who would play what.'

Given Taylor's recent habit of adorning her body with inspirational lyrics, the "Mean' singer no doubt would revel in the master lyricist's confession. Will she give Neil a nod with her self-applied Sharpie art? One way to find out: click here to purchase tickets for the North American leg of her Speak Now World Tour.