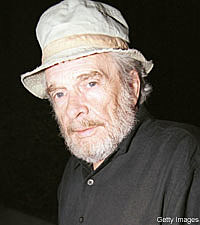 Merle Haggard, who criticized pot-smokers in his 1969 hit 'Okie From Muskogee,' is now coming clean with his own battle with marijuana. What began as a doctor-suggested alternative to Valium turned into an addiction that the 71-year-old country legend has tried to quit in the past. But now, after his recent bout with lung cancer that included surgery to remove part of his lung, the Hag is ready to kick the habit for good.

Performing recently in his hometown of Bakersfield, Calif., Haggard admitted that he is accustomed to performing while under the influence of either tobacco or marijuana. "So it's gonna be interesting as to what kind of a show comes out of this body that's used to performing the other way," he said.

Admitting that he expects 2009 to be a year of hard work, Haggard also revealed that his singing has improved since adopting a healthier lifestyle. And with that approach comes a desire to bring joy to his audience. "I think we can stir up some good humor out there among the folks that are crying for good news, and just give them a moment's happiness," he said.

Haggard also plans on bringing his music to venues that seem to be dismissed by most artists, including churches, hospitals and even jails. A former inmate himself, Haggard has a special affinity for prisons. "Especially women's prisons, they get overlooked," he said. "We played a women's prison in Wyoming one time, and it was the greatest response I've ever received in my life. Forty women were all that were there, and 40 women cried when we left."

Haggard, who has tried quitting marijuana in the past, said that "nothing was funny" when he wasn't smoking pot. Now, calling lung cancer "the greatest test of my fortitude," he has emerged with a busy touring schedule, a new album waiting to be released and a determination to maintain his healthy lifestyle.