Kim Richey's nomadic life parallels the way the Grammy-nominated singer-songwriter tackles her writing process. Never one to stick too rigidly to a particular format, she has been embraced in the mainstream country world, scoring several hits as a writer, including Trisha Yearwood's 1996 chart-topper, 'Believe Me Baby (I Lied)' and Radney Foster's 1993 No. 2 hit, 'Nobody Wins.'

Kim has also crafted her own alt-country and even pop-leaning albums, which have garnered critical acclaim and a worldwide audience, hence the nomadic nature of the artist herself. While she spends much of her time touring, as well as collaborating with writers and producers all over the globe, the Ohio native recorded her last album (2007's 'Chinese Boxes') in London, yet returned to Nashville (in mid-winter) to lay down tracks for the just-released CD, the exquisite 'Wreck Your Wheels.'

While on the road, between a friend's wedding and preparations for her latest U.S. tour, Kim talked to The Boot about her writing process, how living in Great Britain has influenced her music, and how her producer turned a Honda into a invaluable piece of recording equipment.

'Wreck Your Wheels' is a great song and a cool title for the album. Where did the idea come from?

I wrote that with Mando Saenz. He came over and he came up with the idea of "wreck your wheels." I said, "OK, that sounds great. Now we have to come up with what that means." [laughs] Because he didn't know ... he just thought it sounded good.

Another standout on the album is 'Leaving 49.' What is that song about?

I wrote it with a friend of mine, Beth Rowley. Forty-nine is the flat number she lived in.

It's one of those things where it's meant a lot of different things to people.

Listen to 'Wreck Your Wheels'

Are there ever songs you don't feel comfortable having a co-writer on?

Not really. I'm getting someone in to help me say the things that I want to say. It's not like I'm turning the song over to them. I wouldn't share [certain songs] with just anybody, I'd share it with somebody that I thought was a really good writer [and] a friend. I've always co-written with other people, because I enjoy it. It has a lot to do with my social life. A lot of my friends I've met through the years I've met through writing songs together. You get to know somebody instantly that way. It's a pretty intimate meeting for someone you've never met before. And if it goes right and you connect in some way, it's great. Even if another person doesn't come up with a lyric or any of the music, still whatever they contribute is in the song because it makes you think of things you wouldn't have if you hadn't been working with that other person.

Do you usually come up with melody or lyrics first?

It's a bit of both. When I'm writing, I start with a musical idea. And then the musical idea will make me think of a phrase or something. Then I have to try to figure out what that means as a song. The music makes me think of lyrics. It's happened before where I've had phrases that have kind of just popped into my head while I was driving around or walking, and those were kind of saved on the back burner until I used them. But for the most part, the lyrics are inspired by the music. 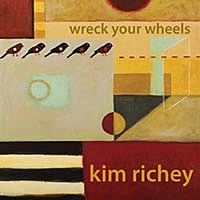 In addition to writing songs for your own albums, are you still constantly writing for other people, too?

That's what I'm doing mostly in London and in Europe, when I'm traveling there. Every so often, I'll hit upon something and think,"Well, this is me" or "this is something that I'll work on at home because it isn't a commercial, pitchable song, it's just something that I want to do myself." I just got back from Stockholm. I was there for three weeks with producers and artists. So that would be an example of the writing stuff that's not for me, really. The songs might be for the artists that I'm writing with or the producer might have a project in mind that I'm helping them with. But every once in a while there might come something where I think, "that song sounds like it might work for me, as well."

Has living in London influenced you musically?

I think it has in the surroundings and in the way that I have different friends there, and I'm thinking about different things when I'm there. It's not always about stuff that happens to me, it can be different things going on with friends. So that's an influence. Or maybe I'll see movies or read books there that influenced music.

How did recording in London (for 'Chinese Boxes') compare to making this album in Nashville?

They are two different records, and I'm not sure how much that depends on location. But this record was made in a really tiny, little studio with Neilson [Hubbard] producing. He's the musical director of my touring band. So I had my touring band, we played together for months. And Neilson uses those guys all the time to do recordings. So I played with those guys a lot. When I made the record in London, the people that played on that record, a couple of them I played with but not all of them before. There wasn't any pressure on this record, because we just made it. We didn't know what we were going to do with it label-wise or anything. It was a pretty relaxed, fun way to make a record.

So not having a label in place before you did the album freed you up in a sense?

Well, I've always been able to do what I wanted to do as far as recording. Even when I was on Mercury, they always let me do what I wanted to do. But this had a different feel about it because we weren't sure what was going to happen with it or if it would even work, really. I was meant to be going someplace else, and that trip fell through. I was at loose ends and didn't know what to do, and Neilson had been wanting to make a record for the longest time. So he said, "Well, you're here in Nashville, let's just start recording." I thought, well OK, let's give it a try. I had no idea I'd end up really liking the making of the record and the record as much as I did.

So where did you actually record the album?

We did it at Nielson's studio, which is so tiny. We did it in January of last year and it was so cold in there! It's just this tiny clubhouse where there is one room -- the studio -- and then there is a tiny room that fits maybe a sofa and four people where the control desk is. If we wanted to do any electric guitar recording, we would have to drive Neilson's Honda up beside the door of the studio and put the amplifier in the car, then pull the cables in through the door. Because there's not enough room in the studio to separate everything out. Neilson says that's how he gets his signature guitar sound, recording with the amp in a Honda [laughs].

We did some recording at my house to figure out what the arrangements of the songs would be, and what songs all of us felt like recording. When we went in to record, everyone was so used to playing together. It was nice to be able to play and record at the same time, rather than have everybody in their separate little booth, which happens a lot in big studios. When you're playing together the take has to have the best feel to it. One song we did, '99 Floors,' the guys were all playing at the same time and Neilson was playing bass. So I had to run the board. I was sitting in the control room looking through the window at them and they set a microphone up for me right by the board. So I sang and ran the board at the same time while they were playing. Everybody chipped in with a little bit of everything. But my knowledge of the board was Neilson telling me which button to push to make it go and which one to push to make it stop, and which ones not to touch!

All the while shivering cold!

[laughs] There is a picture I have of me and I have this giant fluffy sweater kind of sweatshirt thing that I bought years ago at a skateboard shop. I think it was supposed to be for snowboarding. So I sat in there wearing that and sat on the little space heater a lot at the time.

In terms of songwriting, recording or performing, which one would you say you prefer?

They're all different really. I love being in the studio recording. It's like the ultimate escape, because you're in there and you're not doing anything else but that. You get really close to the people you're working with. Performing is a more immediate gratification. That can just be amazing because there's an exchange of energy between the people that you're playing for and myself and the band. When that goes right, it's just incredible. Songwriting, that's the hardest of all of them, but it sticks. It lasts longer because you'll always have those songs.