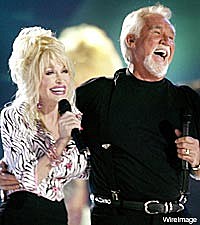 In 1983, Dolly Parton and Kenny Rogers teamed for the pop-country smash duet, 'Islands in the Stream.' Now, more than 25 years later, the pair have reunited for a new collaboration, 'Tell Me That You Love Me,' to be featured on a box set titled 'Kenny Rogers: The First 50 Years.'

The three-CD Kenny collection hits stores on Oct. 27, the same day the four-disc career retrospective 'Dolly' will be released. Time-Life is releasing the Kenny box set, with each CD exploring a specific theme: 'Duets,' 'Story Songs' and 'Love Songs.' The superstar duo's 1985 chart-topper, 'Real Love,' will also be featured on Kenny's collection.

And just in time for Halloween, Dolly's official website is encouraging Dolly fans to dress like their favorite star for the second annual "Dress Like Dolly" Contest!

All you have to do is e-mail pictures of you or your friends dressed up as the superstar this Halloween to info@dollypartonmusic.net before Nov. 7. The top three entries will win a free "Dolly: Live From London" prize package featuring several items, including a CD/DVD combo pack of the singer's soon-to-be-released concert special.