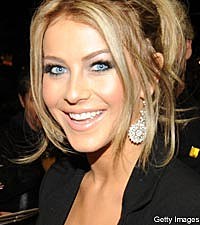 After a week filled with rumors surrounding the possible break-up of country's golden couple, Julianne Hough and Chuck Wicks, Julianne has finally confirmed the split is official.

"We're both just really, really busy with our careers, and we spend a lot of time apart from each other -- so we're just taking a little break right now," the singer/actress tells PEOPLE. Walking the red carpet alone at the Nashville premiere of Tim McGraw's new film, 'The Blind Side,' she insists fans don't need to worry about any acrimony between the two. "Honestly, Chuck and I are such good friends -- we still hang out all the time, and we're still writing together," she says.

Julianne's statement came just one day after the couple appeared together at the CMA Awards, where her now-ex promised the two would address their relationship in the near future. The couple, who met while opening for Brad Paisley, dated for a little over a year. The Boot will have more exclusive comments from Julianne on her relationship status later today.