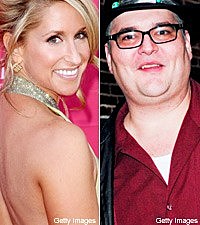 Heidi Newfield is known around Nashville as one of the nicest people in the business, but is that necessarily a good thing? One of her famous friends says no.

Heidi and Blues Traveler lead singer John Popper met on a USO tour back in 2005. On the last night of their tour, the rocker told Heidi that her sweet demeanor may be holding her back -- advice that hasn't left her mind all these years later.

"We were at this pub, and Poppy said to me, 'You love this, and it's clear you're a musician, but you need to learn to stop being so nice. You need to speak your mind and step up for yourself,'" Heidi recalled in an interview with CNN.

Heidi took Popper's backhanded compliment with a grain of salt. After leaving Trick Pony a year after the USO tour, she found success as a solo artist with her breakthrough hit, 'Johnny and June.' She also scored more ACM nominations this year than any other female artist. And she did it all with the same attitude she's always had.

"I don't think you ever, ever, ever have to be a diva or a prima donna to make it to a certain level," she says. "You can always treat people with respect and be nice, and I always plan on doing that."