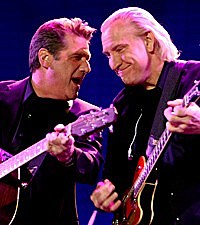 Instead of saying the Eagles "went country," it 's more like country "went Eagles." By the early '90s, country singers may have paid lip service to George Jones and Merle Haggard but more often sounded like they'd grown up listening to the California group; bands like Restless Heart would have been unimaginable without them. A 1993 Eagles tribute album, 'Common Thread,' featured Alan Jackson, Brooks & Dunn and other country crooners.