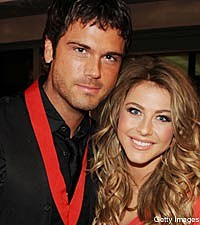 Just one day after Chuck Wicks and Julianne Hough were rumored to have broken up, they appeared at the CMA Awards together, holding hands. But in spite of the show of solidarity, rumors continue to swirl that the pair may have called it quits, fueled partly by comments by Julianne's own brother, Derek Hough.

"All I know is that Julianne has been incredibly, incredibly busy," Derek tells PEOPLE. "She is doing such a great job right now, but she really is in a different place every time that I talk to her."

Julianne was noticeably absent from the red carpet, where Chuck was busy acting as host for 'Entertainment Tonight.' He did take time out from his duties, however, to acknowledge the difficult time the pair are having, but remained tight-lipped on whether he was back on the market or not. "Julianne and I are going to address what's going on in our personal life together," he told ET. "I think that's the only right way to do it and we'll make a statement on that ... Julianne is actually my date tonight, so it's all good. We're going to have a good time and we will address it together, but right now we're going to have a lot of fun," he said.

Julianne will certainly have enough to keep her occupied in the next few months. The singer and dancer is adding actress to her resume, appearing opposite Christina Aguilera, Cher and Kristen Bell in the movie 'Burlesque,' as well as starring opposite Chace Crawford in the remake of the hit '80s movie, 'Footloose.' Meanwhile, Chuck is back in the studio, working on his sophomore album.