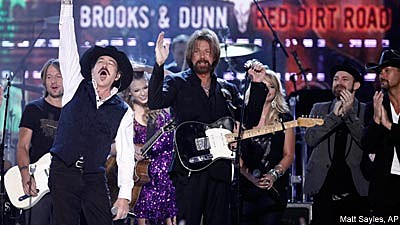 Keith Urban set the tone for the Academy of Country Music's tribute to Brooks & Dunn when he came on stage for the opening number and put his guitar aside long enough to kneel in front of the duo and bow down, arms outstretched before them in homage.

The most successful duo in country history is calling it quits after this year's Last Rodeo tour, ending a collaboration that has spanned 20 years and produced more than 30 million album sales with 23 No. 1 hits.

Taylor Swift put that in perspective when she introduced the team. Country music's sweetheart, who won't be old enough to buy a drink until December, said, "Wow. Twenty years. To me, that's like a lifetime.''

Taylor also produced the night's first prank -- a video of Ronnie Dunn doing his imitation of the ringleted 20-year-old's trademark head shake. Kix Brooks quipped, "You have no idea how important that moment is because in 20 years that's the first time I've ever seen him mess his hair up.''

Taylor and Keith were joined by such stars as Kenny Chesney, Brad Paisley, Jason Aldean, Miranda Lambert, Rascal Flatts and Carrie Underwood. All were in town for Sunday's Academy of Country Music Awards show and all donated their time for Monday's tribute. Ticket sales benefitted the Academy's philanthropic effort, Lifting Lives.

George Strait, the Academy's reigning artist of the decade, told the capacity audience at the MGM Grand Garden Arena, "People ask me all the time who I listen to and I answer in three short words: 'Brooks and Dunn.'" His rocking rendition of 'Boot Scootin' Boogie' drew a standing ovation -- one of several during the night.

Another high point came as poet Maya Angelou praised the country duo in a video address: "In their whole body of work, they've shown how much they care about the human condition," she said.

Jennifer Hudson then hushed the audience with a powerful gospel-laced rendition of 'Believe.' As the standing crowd returned to its seats, Kix quipped, "Girl, have you heard you?''

The evening's lighter side came as Faith Hill repaid a prank from a 1990s tour with Brooks & Dunn when she pulled back her bed covers to find an eel thawing in the sheets.

Two tuxedoed waiters then appeared with take-out boxes for the duo, who watched the performances from an oversized settee to the right of the stage.

An audience surprise came as Lady Antebellum sang 'If You See Him/If You See Her'' and were joined by Ronnie and Reba McEntire in a reprise of their 1998 hit.

Sugarland's Jennifer Nettles said Brooks & Dunn provided them with their first full tour with another artist. After a stirring rendition of the nostalgic 'Red Dirt Road,' the duo's Kristian Bush said that Ronnie started the song on a cocktail napkin and handed it to Kix to complete.

"That napkin absolutely should be enshrined in the Country Hall of Fame,'' he said.

Darius Rucker launched into a driving 'Hard Workin' Man,' after saying, "The one thing I love about them is they always put a little rock 'n' roll in it.''

The 16 acts joined Brooks & Dunn for a rousing finale of 'Play Something Country' after Kix delivered a light-hearted farewell.

"People say this is like a marriage breaking up. No, it's not," he said. "There's things involved in a marriage that are not involved in Ronnie's and my relationship."