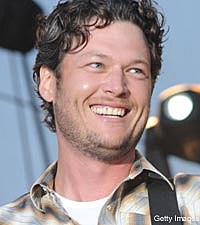 Blake Shelton and PETA (People for the Ethical Treatment of Animals) have been locked in something of a bitter Twitter battle lately. Blake, who's notorious for his frequent -- and frequently sarcastic -- Twitter updates, directed a few choice 'tweets' at the animal-activists group recently, with his comments resulting in his getting banned from receiving the group's updates on the social-networking site.

According to the Ada Evening News, the hometown newspaper of the Oklahoma-born singer (and avid hunter), Blake's irreverent humor in his Twitter remarks ruffled a few PETA feathers. One PETA tweet which read: "Animal testing breaks hearts," prompted Blake to respond: "Yeah, and bow hunting breaks their lungs!" Another PETA tweet which read: "There's nothing funny about BBQing cats," got this rapid reply from Blake: "Ha! Ha! Sorry but when you say it like that it, is damn funny! Ha!"

And we don't know whether he's joking about this or not, but another recent tweet from Blake asked: "Y'all know of any other tree hugging, bunny lovin' groups I can irritate?"

In spite of being blocked from receiving their tweets, the war of words (limited to 140 characters or less) resumed. When a fan commented that they thought Blake had been banned from tweeting PETA, he replied, "As it turns out I'm really all they have."

So far, girlfriend/hunter/animal lover Miranda Lambert hasn't said much about the feud on her Twitter page, but we're pretty sure we haven't heard the last from Blake!