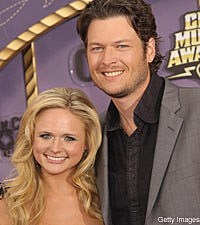 Lots of Blake Shelton's fans have his new single, 'Home,' on iPods. Shelton found the song in the same place. But he didn't put it there. Miranda Lambert did.

"Miranda got me an iPod a couple years ago as a gift," Shelton says. "I can't put music on it unless it's through her computer, so I have to tell her what I want on it. About a year ago, I asked her to put John Conlee and the Bellamy Brothers' greatest hits on there. When I got to the bus, I had Michael Bublé on it. I had no idea who that was."

Shelton says he was a little familiar with Bublé's original recording of 'Home.' "It was such a crossover, I don't think there was any way you could not know it a little," he says. "But I really listened to it closely for the first time, with it being on my iPod, and I thought, 'That's so simple, yet brilliant at the same time."

Apparently, Lambert makes a habit of adding unsolicited material to Shelton's iPod. "She thinks because she likes it, I should like it," he says. "If you look at my iPod now, there's other things on it, like Coldplay, the Gorillaz and other crap that I've never heard of. That shows you the power of 'Home,' because most of that stuff, I won't even give it a chance."