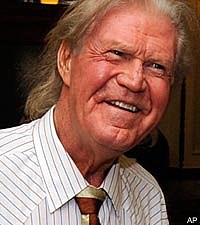 At 70 years old, legendary singer-songwriter Billy Joe Shaver has earned a good bit of the 'outlaw' tag placed on him. Even as recently as a couple of months ago, he was acquitted on an aggravated assault charge stemming from a 2007 shooting incident in the parking lot of a Lorena, Texas bar.

In a recent interview, Billy Joe, who revealed that he's "scared of my lawyer more than anybody," was on strict orders not to discuss the case, but that didn't keep the man who penned 'Honky Tonk Heroes' and 'Georgia on a Fast Train' from sharing his thoughts on other subjects, including the opening scene in last year's Oscar-winning film, 'Crazy Heart,' that struck a little too close to home.

Those who have seen the movie -- and Jeff Bridges' unforgettable Academy Award-winning portrayal of Bad Blake, will recall that to avoid rest-room breaks while making his way between less than glamorous gigs, 'Bad' travels with a plastic bottle in which he relieves himself -- something Billy Joe reasons another Oscar-winning actor (and longtime friend) must have shared with the filmmakers.

"I didn't think anybody knew about that," Billy Joe tells the Kansas City Star newspaper. "But Robert Duvall is one of the guys that produced that thing, and I am sure that is where it came from."

Robert Duvall, who also acts in 'Crazy Heart,' stood by Billy Joe's side during the recent trial. Another artist connected to the film, the late Stephen Bruton, who composed the 'Crazy Heart' soundtrack with T Bone Burnett before he died from cancer last year, was Billy Joe's first guitarist.

Billy Joe says Bad Blake isn't just based on him, however. He's "a little bit of everybody," including Kris Kristofferson, Waylon Jennings and Willie Nelson, "without really being anybody."

While the Grammy-nominated Billy Joe has had measurable success with his songs recorded by the likes of Elvis Presley, John Anderson and Patty Loveless, he says he doesn't set out to write songs for others.

"I don't really get in [to the process] unless it is some character I see that I want to write about, or something that happened with me," he notes. "It's still pretty close to the bone with me."

In addition to brushes with the law, and numerous marriages and divorces (he and wife Wanda are currently on their second divorce -- and still spending time together), Billy Joe has survived a heart attack and broken his neck three times. Most tragically, he lost his son, Eddy, to a heroin overdose, and wife, Brenda (to whom he was married three times) to cancer. All the while, he has navigated his way through great personal hardship by continuing to write.

"To me, it's the cheapest psychiatrist there is," he muses. "Most of my songs are written trying to get back in the house, or trying to stay alive - one or the other."

Billy Joe is currently working on a new album and while nearly all of his musical heroes have recorded his songs, one legendary artist, 84-year-old Ray Price is just getting around to cutting one of his tunes.