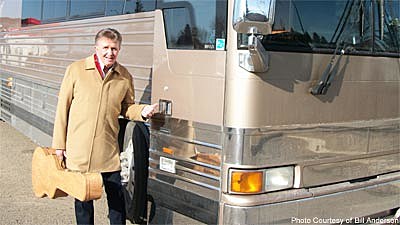 When Whisperin' Bill Anderson embarked on his 12-day Canadian tour on March 23, he thought it would just be business as usual, rolling down the highway in his tour bus going from one gig to the next.

But Bill and his Po' Folks Band had a rude awakening ... literally. During the first few nights on the road, the Country Music Hall of Famer heard some eerie moaning sounds coming from the bus' back state room. Then, last Wednesday night (Mar. 24), the bus driver had to come to a screeching halt after hearing a loud scream.

That's when Bill's sense of humor kicked in. "I'm trying to figure out if it's Hank Williams wanting to co-write a song or Faron Young just messing with my head," he jokes with That Nashville Sound.

We're guessing Bill's nickname may change to 'Screamin'' Bill Anderson if his ghostly friends don't find a new bus and let him get some sleep!

For a few "haunting" moments, Bill and his Po' Folks managed to capture some of the paranormal action on video. Watch it here.